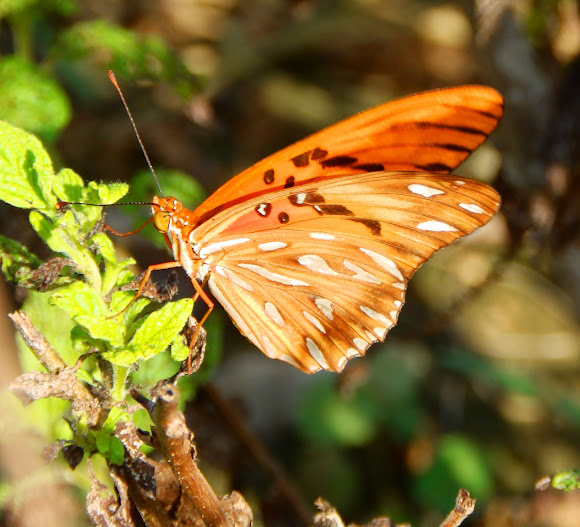 In its adult form, the gulf fritillary is a medium-sized butterfly that has extended forewings and a wingspan range of 6.5 to 9.5 mm. This butterfly exhibits sexual dimorphism as females are typically larger in size than males. The underside of the wings is brown and speckled with silvery white dots. In contrast, the top surface layer of the wings is deep orange in color with black streaks running across. In addition to the size difference between the two sexes, females are usually darker in color and are more marked with black streaks. The majority of host plants for gulf fritillaries come from Lantana and Passiflora, two genuses of flowering plants in the Verbenaceae and Passifloraceae families, respectively. Both male and female gulf fritillaries possess defensive glands on their abdomens that emit a distinct odor composed of several different types of chemicals, such as 6-methyl-5-hepten-2-one and hexadecyl acetate. This leads to birds avoiding the gulf fritillaries in favor of other prey.

Seen in the area of Dos Pos in Bonaire but gulf fritillaries are found primarily in the southern parts of the U.S. This butterfly’s range can extend from the southern U.S. into parts of Mexico and Central America and sometimes as far as parts of South America.