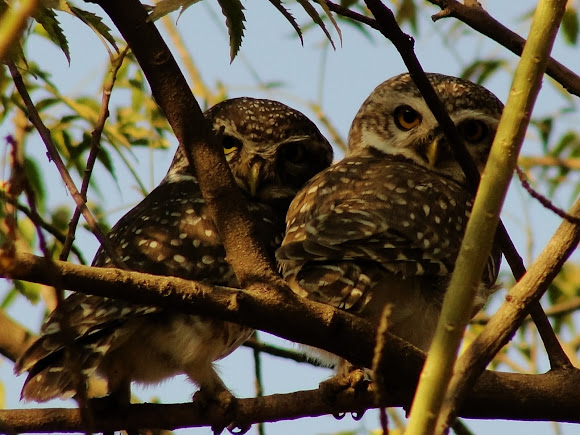 The breeding season is November to April. Courtship behaviour includes bill grasping, allopreening and ritual feeding. The female may call with the male, bob head and deflect its tail in invitation. The social organization of family groups is not clear and multiple males may copulate with a female and females may attempt pseudocopulation, possibly a kind of displacement behaviour. They nest in cavities often competing with other hole-nesters such as mynas. They may also nest in holes in vertical embankments. The nest may be lined with leaves and feathers or may use the existing lining from a prior occupant. The typical clutch is made up of three or four spherical white eggs (30.9mm long and 26.3 mm wide, 11.6g) and incubation begins with the first laid eggs leading to a wide variation in the size of the chicks. The young are fed initially on insects such as cockroaches and later fed small vertebrate prey such as mice(a toad Bufo stomaticus has been noted in Gujarat). The chicks gain weight during the early stages but lose weight before fledging. Only one or two chicks may fledge and they leave the nest in about 20–28 days.

The breeding season is November to April. In addition to my previous series http://www.projectnoah.org/spottings/111...

Thanks a lot Tiz,,

Thanks a lot williefromwi for suggestion, moving forward the same,

very nice spotting Sachin, if this were mine, I would go into edit, and slide the last photo up to the number 1 postion. To me the last photo showcases the detail of these owlets the best.

Thanks for visit TL,

Would have loved to see them!