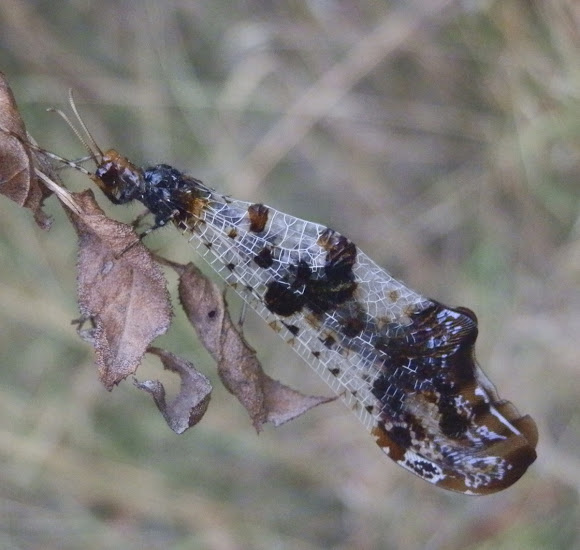 This fantastic antlion looked like many other things ( a piece of moulted reptilian skin, an abandoned cobweb with trapped insects and even dried-up bird dropping.) as it clung to a dried twig. Pic 4 is a dorsal view and Pic 5 from the underside showing a dark abdomen. The head, thorax and abdomen were dark with the last abdominal segments showing some yellow. Antennae were short with slightly curved tips. The spectacular wings looked like lace with dark patterns of black and brown. When in flight, the frames of the wings were hardly visible, showing flashes of dark spatters. Body length (including long fore-wings and antennae) would have been about 50 mm.

Spotted on a dry Goodenia plant in a nature reserve. This species seems to be distributed along the coastal parts of the Australian mainland. http://biocache.ala.org.au/occurrences/s...

An absolutely delightful spotting for me...but difficult to photograph as it was resting right overhead several ant mounds with aggressive soldiers ! Getting photos of it with its wings open was more difficult as it flew clumsily through the tea-tree bushes and then came to rest on rushes growing in a swampy area. The larvae of these antlions build sand traps and wait just under the surface for an unsuspecting ant to walk past. They spray sand out when the prey walks past, causing a sand slide.. The ant slides into the trap and straight onto the waiting mandibles of the antlion larva. Order: Neuroptera Family: Myrmeleontidae Subfamily: Myrmeleontinae

Awesome spotting! This one has a neat pattern to it.

What a great find Leuba. I've never seen an Antlion like this one. LOVE the wings!

Thanks Martin and WildThings. Martin you're so right, I am sure it was meant to look wet like a large bird's dropping - that was my first impression. The two tiny white arc-shaped marks on the brown tips made it look like a wet glob.
i am tempted to add it to Mimics Mission !

Goo is what I thought too Martin. It took a good 60 seconds to decide it was a real creature, and only later when it moved I accepted it was alive !!

I vote for SOTD

That is totally bizarre! The tips of the wings look wet, like a drop of putrid goo dripping from a glop of decaying waste. That is the most disgusting and unappetizing insect I ever had the misfortune to see. I'm sure that is the whole idea. A great photo Leuba.

What a crazy looking creature. Those wings are quite spectacular and those 'rubbery' bits up the back of it's neck are truly alien looking.

I love the wings on these insects, absolutely incredible!