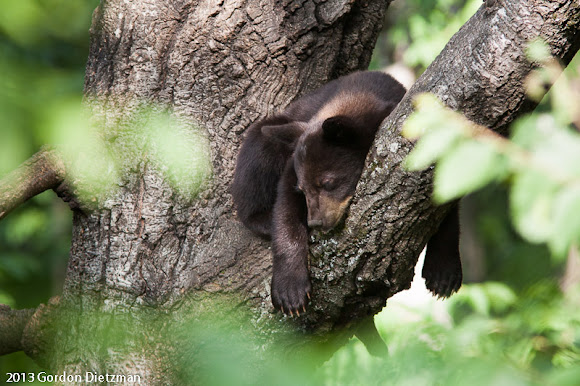 Black bears are medium-sized bears found in North America. The term "black" is a bit of a misnomer as these bears may be brown (cinammon), black, or even white (Kermode). Black bears may weight as much as 600 pounds, but most are much smaller. Males tend to be larger than the females.

Black bears are usually most active at night and in early morning and late evening. This young bear decided to snooze away the middle of the day not far from where I was photographing birds and other bears.

I don't worry too much about black bears; they tend to be quite shy around humans. There is an elevated board walk at this location and, although the wild bears that inhabit the area could quickly climb it, I've never heard one doing so. Grizzly bears, are, of course, a completely different animal. I almost always carry bear spray when I'm hiking, canoeing, or camping in bear country. Bear spray has proven to be very effective on grizzlies. There is some indication that it may be less effective on aggressive black bears and I don't think there is any proof that it works on any other species of bears, but it probably does.

Would they pose any danger to yourself? Do you have a plan of action should you find yourself face to face with one? Love this photo!