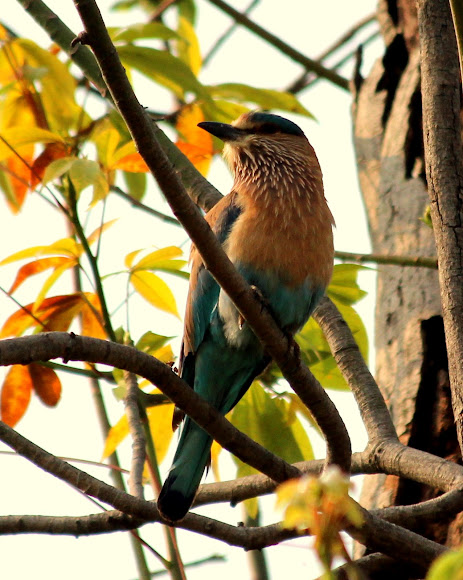 The Indian Roller is a stocky bird about 26–27 cm long and can only be confused within its range with the migratory European Roller. The breast is brownish and not blue as in the European Roller. The crown and vent are blue. The primaries are deep purplish blue with a band of pale blue. The tail is sky blue with a terminal band of Prussian blue and the central feathers are dull green. The neck and throat are purplish lilac with white shaft streaks. The bare patch around the eye is ochre in colour. The three forward toes are united at the base. Rollers have a long and compressed bill with a curved upper edge and a hooked tip. The nostril is long and exposed and there are long rictal bristles at the base of the bill. The three forward pointing toes appear to be joined at the base Three subspecies are usually recognized. The nominate form is found from West Asia (Iraq, Arabia) to Bangladesh and north of the Vindhyas mountain ranges. The subspecies indicus is found in peninsular India and Sri Lanka. The southern form has a darker reddish collar on the hind neck which is missing in the nominate form. The race affinis of northeastern India and Southeast Asia (Thailand, Yunnan, Indochina) is sometimes considered a full species, but within the Indian region, it is seen to intergrade with benghalensis. The form affinis is darker, larger and has a purplish brown and unstreaked face and breast.[2] It has underwing coverts in a deeper shade of blue.[3][5]

The Indian roller is distributed in the South Asian mainland but extends into Sri Lanka, the Lakshadweep and Maldive Islands and into Southeast and parts of West Asia.The main habitat is cultivation, thin forest and grassland. They are often seen perched on roadside electric wires These birds are usually seen perched on prominent bare trees or wires. They descend to the ground to capture their prey which may include insects, arachnids, small reptiles (including Calotes versicolor and small snakes and amphibians. Fires attract them and they will also follow tractors for disturbed invertebrates. In agricultural habitats in southern India, they have been found at densities of about 50 birds per km2. They perch mainly on 3—10 metre high perches and feed mostly on ground insects. Nearly 50% of their prey are beetles and 25% made up by grasshoppers and crickets. The feeding behaviour of this roller and habitat usage are very similar to that of the Black Drongo. During summer, they may also feed late in the evening and make use of artificial lights and feed on insects attracted to them.They are attracted to swarms of winged termites and as many as 40 birds have been seen to perch on a 70 metre stretch of electric wires. Their habit of feeding near roadsides sometimes results in collisions with traffic. A decline in the numbers of these birds seen along roadsides in northern India has been noted. Subspecies affinis from Thailand The display of this bird is an aerobatic display, with the twists and turns that give this species its English name. The breeding season is March to June, slightly earlier in southern India. Displays when perched include bill-up displays, bowing, allopreening, wing drooping and tail fanning. Holes created by woodpeckers or wood boring insects in palms are favoured for nesting in some areas. Nest cavities may also be made by tearing open rotten tree trunks or in cavities in building. The cavity is usually unlined and is made up mainly of debris from the wood. The normal clutch consists of about 3-5 eggs. The eggs are white and broad oval or nearly spherical. Both sexes incubate the eggs for about 17 to 19 days. The young fledge and leave the nest after about a month. Nearly 80% of the eggs hatch and fledge. The call of the Indian Roller is a harsh crow-like chack sound. It also makes a variety of other sounds, including metallic boink calls. It is especially vociferous during the breeding season. The bird bathes in open water by plunge-diving into it, a behaviour often interpreted as fishing.But it may occasionally attempt fishing from water. Blood parasites Leucocytozoon of the family Plasmodiidae have been noted in the lung tissues. Parasitic helminth worms Hadjelia truncata and Synhimantus spiralis were recorded as well.

Being very common in the populated plains of India, it is associated with legends. A local name is neelkanth (meaning "blue throat"), a name associated with the deity Shiva (who drank poison resulting in the blue throat). During former times, a captive roller would be released by the local ruler during festivals such as Dussera and Durga Puja. Adding its chopped feathers to grass and feeding them to cows was believed to increase their milk yield. The Indian Roller has been chosen as the state bird by the Indian states of Andhra Pradesh, Bihar, Karnataka and Odisha.