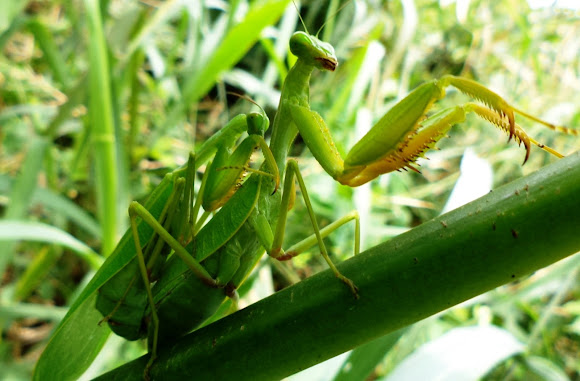 Sphodromantis viridis is a species of praying mantis that is kept worldwide as a pet. Its common names include African mantis, giant African mantis, and bush mantis. S. viridis is native to West Africa south of the Sahara desert. It can also be found as an introduced species in areas outside its original range including Israel and Spain. Despite its scientific name (viridis is Latin for green) this insect ranges in color from bright green to dull brown. Females can reach 10 centimetres (3.9 in) in length. Due to the sexual dimorphism typical of mantises, the male is much smaller. Females may also be distinguished from males as they have six segmented abdomens compared to an eight segmented abdomens of the males. As adults, both sexes have a distinctive white spot on their wings. They have a yellowish color on their inner foreleg distinguishable from the black eyespot and white dots of the European mantis Mantis religiosa with whom it shares some range.

A very keen eye is often required to spot mantids in the wild. And then you often find only one well-camouflaged mantis at a time. Except for a mating pair. This couple was located on a stalk, shaded under the leaf of a cocoyam plant midday. A rare sight, similar to my very first photo of a mantis. Usually, female mantids are bulkier than their male counterparts. This one exuded confidence appearing to be in control of the situation (intrusion) by the manner she glared and the way her fearful raptorial legs stood. Ironically, the male was the one acting like a female (little wonder they are often victims of sexual cannibalism). He remained on top trying hard to hide his face. He must have been as bashful as someone caught red-handed in a shameful act would be. The phenomenon of gender role reversal in animal kingdom is the subject of the topic sexual dimorphism.