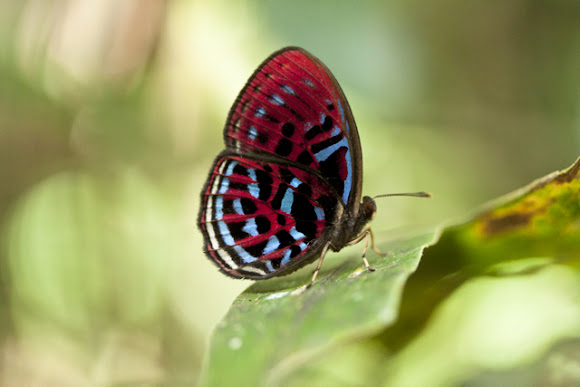 Malay Red Harlequin Paralaxita damajanti. The Malay Red Harlequin is something of an enigma. Butterflies use brilliant colours for a variety of purposes - to attract the attention of potential mates, to advertise their unpalatability, or to confuse, startle or warn avian predators. They tend to occupy sunlit areas where their bright colours can be shown to their best advantage. Not so with this species, which is normally seen only as a silhouette in the shadowy undergrowth, and where it's flight is so quick and erratic that it is almost impossible to see where it has settled. The explanation for the striking appearance could be connected to the fact that insects can see well beyond the visible spectrum, into the ultra-violet. In semi darkness the butterfly is almost invisible to mammalian, reptilian or avian eyes, but the distinctive pattern and contrasting colours may reflect a strong ultra-violet trademark that could be essential to enable potential mates to locate each other. The genus Paralaxita contains 4 species - damajanti, telesia, orphna and dora. There are 2 other closely related genera with very similar species - Laxita, and Taxila. All the species in these 3 genera are confined to Sundaland, the geographical region which encompasses Thailand, peninsular Malaysia, Sumatra, Borneo, Palawan and Java. Paralaxita damajanti occurs in peninsular Malaysia, Sumatra and Borneo. Lifecycle The early stages appear to be unknown. Adult behaviour The butterflies are very difficult to locate, and invariably encountered singly. They are usually seen when accidentally disturbed while the entomologist is hacking through thick undergrowth, at which time they suddenly take flight and resettle a few metres away in darkness, on the surface of a leaf. Females have a habit of hopping incessantly from leaf to leaf - in Taman Negara I found a female which was working it's way up and down the leaves of a vine, pausing only for a second on each leaf. This went on for several minutes. Females of many butterflies habitually fly from leaf to leaf "tasting" each leaf with sensors on their feet, trying to locate the correct species of plant on which to lay their eggs. In this case however photographs revealed that the butterfly was imbibing from the surface of the leaves each time it landed, and it seems that the hopping activity is a defence strategy aimed at birds or reptiles which would be unable to react quickly enough to catch the very active butterfly.

Habitats This species occurs in dense rainforest at altitudes between about 200-1200m.

Amazing! Thanks for sharing!

Congratulations Michele! What a little beauty!

What a beauty! Thanks for the interesting info.

Very nice spot, made more interesting by the text. I appreciate the images and insights.

Beautiful capture MIchele,congrats on the SOTD and thanks for sharing

Congratulations Michele, it is a gorgeous butterfly. Can't wait to see all you photographed in southeast asia!

Wow! spotting of the day. congrats!

Please consider adding this and any other relevant spottings to the mission Biodiversity of Thailand: http://www.projectnoah.org/missions/1253...

Congratulations on getting SOTD. What beautiful colors!!!

Congratulation on this wonderful SotD !