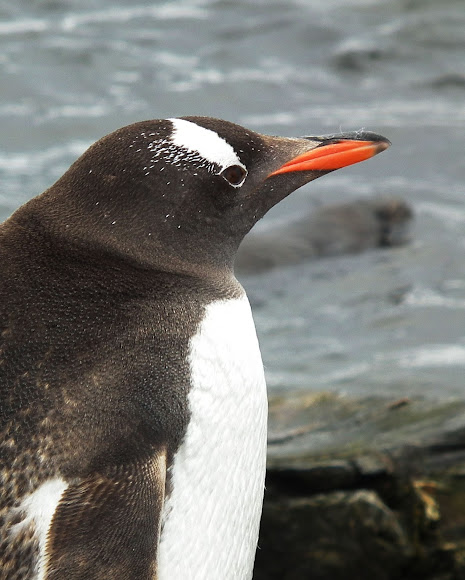 Easily identified by the bright orange beak and white patch that runs along the top of the head between the eyes. Also has a rather long tail for a penguin. They are actually the third largest penguin species, though there is quite a gap between the gentoo and the king (http://www.projectnoah.org/spottings/197...) and emperor penguin. Their diet is made up mainly of crustaceans like krill, and they are the fastest swimmers of all the penguin species.

Circumpolar distribution, breed on subantarctic islands and the Antarctic peninsula. This individual was found in the protected cove by King Edward Point, South Georgia, walking along the shingle beach.

As far as I'm aware, it's strange to see these penguins both on their own and in this area of South Georgia. I have no idea how this little guy ended up where he was. I'm still not sure if that white patch on his rump is as a result of moulting, or if he was attacked by something. We were walking from Grytviken back to our ship at King Edward Point when we stumbled upon this lone gentoo walking in the opposite direction. He stopped to pose for some pictures, then ran off to Grytviken!

I love penguins too, it was so great to see them in their natural habitat!

Such a nice series!

Thanks very much Nuwan :D