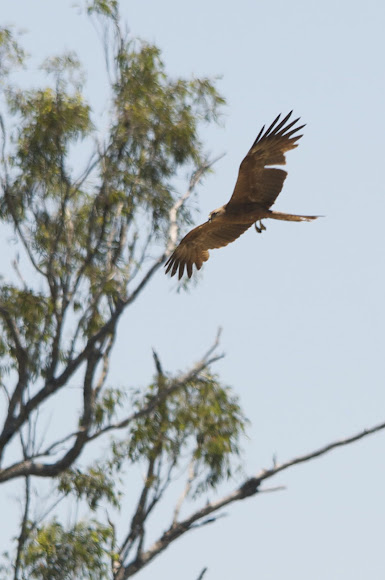 With a distribution that spreads over four continents, the black kite is probably the world's most abundant bird of prey. Not surprisingly for a species with such a colossal range, up to 12 subspecies have been described, with between six and eight commonly recognised . Despite their shared name, none of these subspecies are actually black, but rather have plumage that varies from moderate to dark brown, with irregular light-brown and rufous markings . The brown to greyish-white head often appears paler than the rest of the body, while the cere (bare patch of skin at the base of the bill) is yellow. Although the bill is typically black through most of its range, the African subspecies tend to have yellow bills, hence the species' alternative name. In flight, the long, shallow-forked tail is conspicuous and the feathers on the outer edge of the wings appear 'open fingered'. The female is marginally larger than the male but otherwise the sexes are very similar, while the juveniles are only slightly paler and less uniform in colouration

Black kites (Milvus migrans) occur in tropical portions of Australasia, Eurasia, and Africa. However, they are lacking in the Indonesian Archipelago, specifically in areas between the Wallace line and the mainland of Southeast Asia. Black kites also occur in temperate areas, including Palearctic, Oriental, Ethiopian, and Australian regions. However, year-round, they reside mainly in the southern-most areas of tropical Oriental and Ethiopian regions. Their abundance in these areas has been associated with the abundance of resources. There are no known regions in which this species has been introduced. Their Palearctic range, spanning from the west coast of Central Europe to the east coast of Asia, is occupied only during early summer (late March to early May) and is mainly for breeding. The Australian region is used only during winters (December through February). Black kites migrate depending on the availability of roosting sites and resources. Biogeographic Regions: palearctic (Native ); oriental (Native ); ethiopian (Native ); australian (Native )