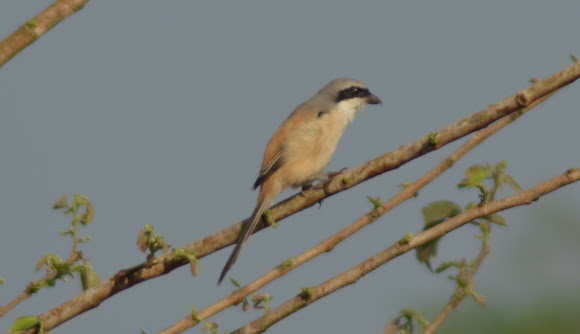 I tried to get clearer pictures but could not really better these. Another find from Rakaskop near Belgaum

They are found in scrub, grassland and open land under cultivation. A survey in southern India found them to be among the commonest wintering shrikes and found at a linear density along roadsides at about 0.58 per kilometer, often choosing wires to perch

The Long-tailed Shrike is a typical shrike, favouring dry open habitats and found perched prominently atop a bush or on a wire. The dark mask through the eye is broad and covers the forehead in most subspecies and the whole head is black in subspecies tricolor and nasutus. The tail is narrow and graduated with pale rufous on the outer feathers. Subspecies erythronotus has the grey of the mantle and upper back suffused with rufous while the southern Indian caniceps has pure grey. A small amount of white is present at the base of the primaries.