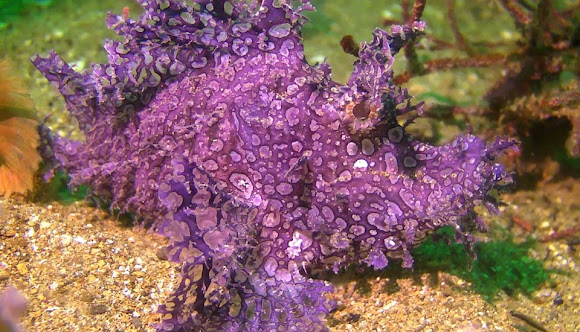 The weedy scorpionfish, commonly called popeyed scorpionfish, Rhinopias frondosa, is a benthic marine fish which belongs to the family Scorpaenidae or also known as the Scorpion-fishes family. The weedy scorpionfish has a highly compressed body, can reach a maximum length of 23 cm, and can vary considerably in color as well as appendages depending on its environment. Specimens found in rocky, algae rich waters are covered in weed-like appendages, whereas specimens found in deeper soft-bottomed waters with soft corals and sponges have fewer appendages. Color can range vastly from dark red and purple to yellow and lavender. The variations differ so vastly that the specimens are often misidentified as between this species and two related species, Rhinopias aphanes and Rhinopias eschmeyeri . Indeed, some have argued Rhinopias eschmeyeri is a morphological variant of Rhinopias frondosa rather than a separate species. However, a 2006 study by Motomura and Johnson confirmed R. eschmeyeri's existence and distinguished it from other members of the genus Rhinopias.

A beautiful fish, very rare, but once found, can be easily located again as they tend to stay at the same place unless disturbed. Highly sought after by Underwater Photographers and considered a 'Holy Grail' critter. This spot is the purple variation of the Rhinopia frondosa. Another variation is in this spotting : http://www.projectnoah.org/spottings/188...

Thank you, @staccyh.
Yes, they are a rare find and lovely creature :)

I love your last photo, this is such a cool creature. Love the colour too. Nice find!

Thanks, @Rieko :), thier pectoral fins are partly transparent, makes them quite unique!

Thanks, @Antonio :)
This Rhinopias are gorgeous in their ugly way :D
Holy Grail among scuba divers into macro photography.