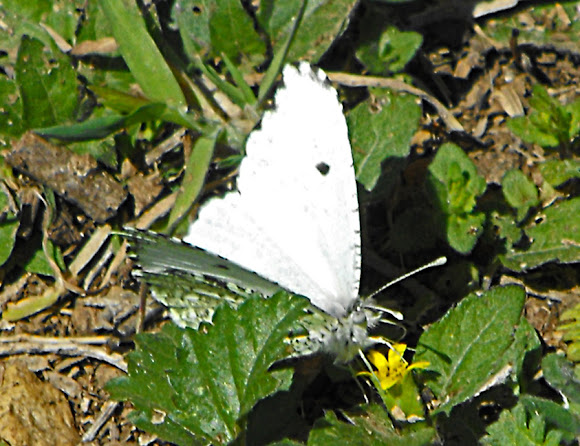 The Falcate Orangetip (Anthocharis midea) is a North American butterfly that was described in 1809 by Jacob Hübner. It belongs to the family Pieridae which is the white and sulphurs. These butterflies are mostly seen on the eastern side of the United States, particularly in Texas and Oklahoma. They eat the nectar of violets and mustards. They tend to live in open, wet woods along waterways, in open swamps, and less often in dry woods and ridgetops. The Falcate Orangetip is a true spring time butterfly, being on the wing from April-May (March-May in southern Texas). - The upper side of the male's forewing is orange, but females lack this. Both have a round black spot located in the cell. The underside of the hindwing usually has intricate green-marbling. The orangetips have a wingspan of around 3.5-4.5 centimeters.

Life Cycle - Males patrol on hilltops and flats all day seeking females. Females lay their eggs singly on host plant flowers. The eggs are yellow-green but turn red just before hatching. The larvae feed mainly at night and prefer to eat flowers, flower buds, and seed pots rather than leaves. They are also cannibalistic, devouring smaller larvae that may be feeding on the same plant. The larva is an olive-green color with a yellow middorsal stripe. There is a white spiracular stripe that runs the length of the body. It has short hairs and is covered with tiny black dots. It can grow up to 3 centimeters long. The larvae pupate in mid June. The chrysalis is a yellowish color and is covered with black spots. It also has a spike-like projection on the head which makes it look somewhat like a thorn. The chrysalis may overwinter for two or more years. It has 1 brood per year.

Found a few in the back yard at the Horse Herb and other small flowered weeds.

Thank you J... I was seriously considering a Marble species.

Okay, that makes them females. :-)

Sorry, no orange either.

No J, they they had no yellow. I played with the lighting in photoshop and no yellowing was present. Probably more like a Marble species. There were more today and no yellow on them either.

Please, verify! Were other butterflies of the same species flying around displaying orange tipped wings?