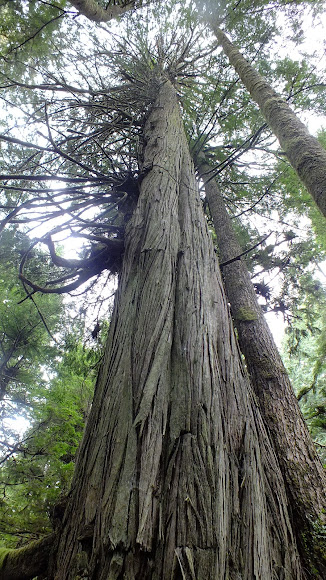 Western red cedar trees and shrubs are pyramidal in form and may be up to 60 metres tall and 6 metres in circumference, measured above the strongly buttressed base. The cinnamon-red or brownish outer bark is relatively thin, fissured, and scaly, shedding in irregular flakes; the inner bark is fibrous. Short, horizontal, or slightly drooping branches bear dense branchlet systems in flattened sprays that appear bright green on the upper side and dark waxy green beneath. The tiny, pointed, scalelike leaves may have faint whitish patches on the undersurfaces. The egg-shaped or slightly elongated cones, 8 to 12 mm long, bear five to six pairs of thin flexible scales.

Western red cedar is often found in moist habitats (shaded forests) in areas of maritime climate with high rainfall. This species grows best on seepage and alluvial sites. It also grows in drier habitats; however, the species is only abundant on wet sites such as in ravines, seeps, along streams, or in poorly drained bottomlands which are typically rich soil.

Sure is, Gaia80. It certainly was a wonderful experience standing next to one of these giants :)