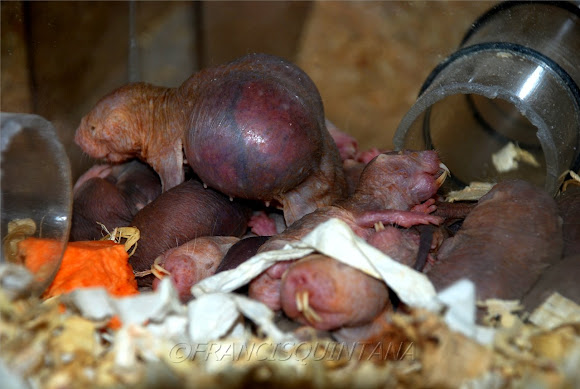 The naked mole rat also known as the sand puppy or desert mole rat, is a burrowing rodent native to parts of East Africa and is the only species currently classified in the genus Heterocephalus. The naked mole rat and the Damaraland mole rat are the only eusocial mammals that are known. It has a highly unusual set of physical traits that enable it to thrive in an otherwise harsh underground environment; it is the only mammalian thermoconformer, it has a lack of pain sensation in its skin and also has a very low metabolism together with a low rate of respiration.

The naked mole rat is native to the drier parts of the tropical grasslands of East Africa, predominantly southern Ethiopia, Kenya, and Somalia. Clusters averaging 75 to 80 individuals live together in complex systems of burrows in arid African deserts. The tunnel systems built by naked mole rats can stretch up to three to five kilometres (2–3 mi) in cumulative length.

The naked mole rat does not regulate its body temperature in typical mammalian fashion, homeostasis. They are thermoconformers rather than thermoregulators in that, unlike other mammals, body temperature tracks ambient temperatures. The relationship between oxygen consumption and ambient temperature, however, switches from a typical poikilothermic pattern to a homeothermic mode at 28 °C. At lower temperatures, they use behavioural thermoregulation, as when cold, naked mole rats huddle together or bask in the shallow, more sun-warmed parts of their burrow systems. Conversely, when they get too hot, they retreat to the deeper, cooler parts of their tunnel system. The skin of naked mole rats lacks a key neurotransmitter called substance P that is responsible in mammals for sending pain signals to the central nervous system. The naked mole rats feel no pain when they are exposed to acid or capsaicin. When they are injected with substance P, however, the pain signaling works as it does in other mammals, but only with capsaicin and not with the acids. This is proposed to be an adaptation to the animal living in high levels of carbon dioxide due to poorly ventilated living spaces, which would cause acid to build up in their body tissues. Naked mole rats' substance P deficiency has also been tied to their lack of the histamine-induced itching and scratching behavior typical of rodents

Thanks for the observation Keithp2012

@ keithp2012 Yes, these guys are a very interesting species...

oh, so she's pregnant! Heavily pregnant I should say!

@ keithp2012, Naked mole rats are rodents, but they live in communities like those of many insects. Several dozen rats live together in colonies led by one dominant rat—the queen. As in some insect species, the queen is the only naked mole rat female to breed and bear young. Her's another link...
http://animals.nationalgeographic.com/an...

What is going on with that huge one looks like it swallowed a golf ball!