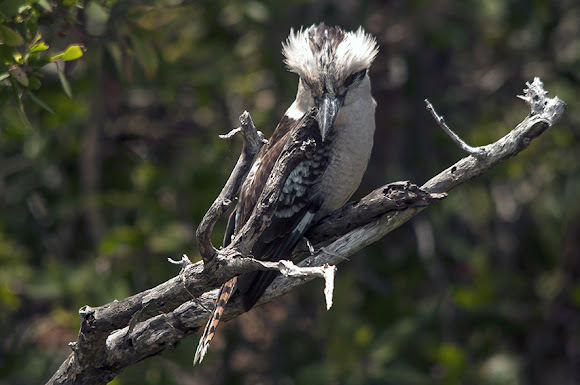 The Laughing Kookaburra is a stocky bird of about 45 cm (18 in) in length, with a large head, a prominent brown eye, and a very large bill. The sexes are very similar, although the female averages larger and has less blue to the rump than the male. They have a white or cream-coloured body and head with a dark brown stripe through each eye and more faintly over the top of the head. The wings and back are brown with sky blue spots on the shoulders. The tail is rusty reddish-orange with dark brown bars and white tips on the feathers. The heavy bill is black on top and bone coloured on the bottom.

The Laughing Kookaburra is native to eastern mainland Australia, and has also been introduced to Tasmania, Flinders Island and Kangaroo Island. Some were also introduced to New Zealand between 1866 and 1880, but only those released on Kawau Island by Sir George Grey survived. Descendants of these individuals are found there today. Remnants of this population have been seen on the New Zealand mainland near Matakana. Individuals were released at Perth, Western Australia, in 1898 and can now be found throughout southwest Australia.

Astonishing series! I would love to see a kookaburra in the wild! Thanks for sharing! Must say the last picture is my favorite!