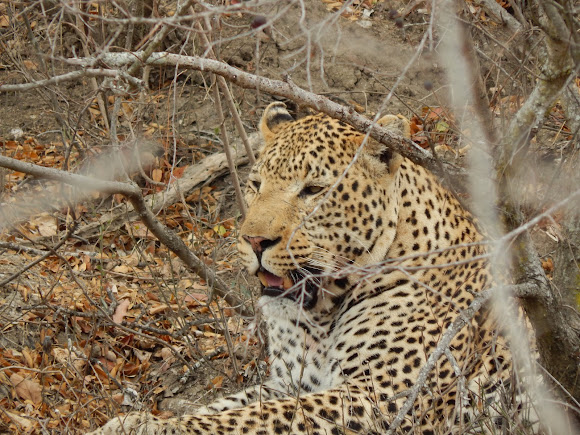 Leopards have an average weight of 20 to 90 kg for a male and 17 to 60 kg for a female. Life span in the wild is 9 to 14 years and 21 years in captivity. Females have a gestation period of 100 days giving birth to 2 to 3 cubs. Leopards are extremely territorial with both male and female holding their own territory. However the territory is only held against members of the same sex. As they are solitary creatures you will likely only see two leopards together when mating or cubs and their mother. They need to hunt about once a week. If in area where there are hyena, lion, or elephant the leopard will hide its food in bushes or in trees so they wont be able to be chased off their kill. Elephants, while not predators, will chase leopards off of kills and attempt to smash them. While leopards are mostly nocturnal they are also opportunistic. This will lead to kills being made in the day if the opportunity presents itself. However they will not take a lot of risks when hunting as an injury can lead to death or starvation due to an inability to hunt.

Was spotted the Savannah Biome of South Africa at Karongwe National Park.

This leopard is a male that had just made a kill (in the day) and was relaxing after dragging the kill (Impala) into a tree. If you have any questions feel free to ask.

No more questions :) thanks very much for the changes,like this the spotting is much more "educational" and we all share a bit of your amazing experience

Awesome capture KelseyCleland,just beautiful,it would be nice if you add some information,so we all can learn more about the animal and the habitat where you spotted it,congrats on such a great spotting page and thanks for sharing