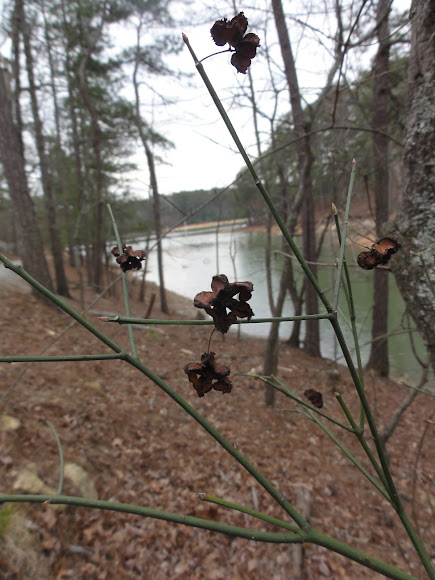 Euonymus americanus is commonly referred to as Strawberry Bush, Bursting Hearts or John Baptiste - Percival. The common names all refer to the plant's seed pods which first appear in mid-summer. It is an evergreen plant, though the number of leaves is greatly diminished during the winter. The plant is notable for its photosynthetic stems and its seed distribution method. Once the seeds have ripened in mid-autumn the red capsules burst open, scattering the orange seeds up to 15 feet. The leaves are well liked by deer, which often strip the bush bare. E. americanus will spread by underground runners forming small thickets. Stems which come in contact with the ground will readily root. The stems are relatively weak and taller plants lean against other shrubs or trees for support. The plant flowers in late April and early May. The tiny flowers are yellow-green in color.

Thanks! I never would have guessed that but when I look at pics of the flowers and the seedheads side by side I see it now!

These are the spent, dry seed pods. Here's what they look like a bit earlier:
http://www.projectnoah.org/spottings/189...