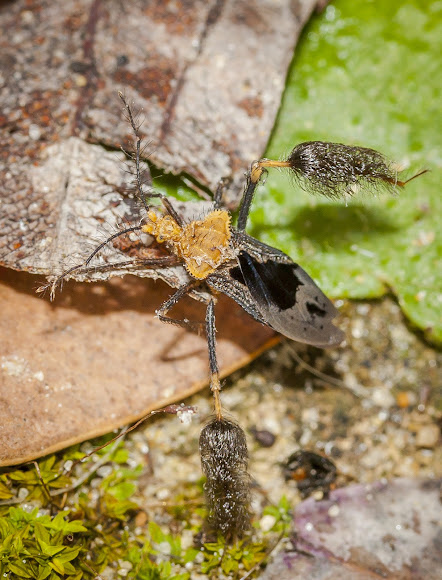 About 12mm in length, this assassin bug has developed a unique hunting technique. It specialises on ants, and will hunt even the fierce Australian bulldog ants. The bug has a glandular hair-like structure (trichome) on its underside which produces a secretion irresistible to ants. Once it has placed itself close to an ant trail, it will wave its feathery legs in order to attract the ants attention. As ants approach the bug, it will rear up on its hind legs exposing the trichome and source of the secretion. Once the ant grabs on to the bug to carry it away, it plunges its stylet into a weak spot in the ant's exoskeleton and sucks it dry.

I found this little guy in the Lowden area, in dry marri (Corymbia calophylla) and jarrah (Eucalyptus marginata) forest, in the southwest of Western Australia.

The wikipedia page has a very interesting link to a video of Ptilocnemus lemur's hunting technique.

Thanks for the comments, Lauren and tmvdh.

Wow! This one is fabulous! Would love to find this!