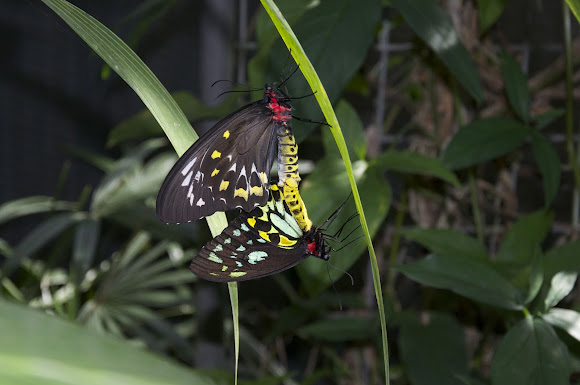 The Cairns Birdwing male is black and green. The upper side of the forewings are mainly black with emerald green around the leading and trailing edges; the hindwings are emerald green with 4 black dots in an arc parallel to the outer edge. The female has black upper forewings with white patches, and black hindwings with yellowish brown margin containing black spots. The female does not have any green markings. The Cairns Birdwing male butterfly is similar to the New Guinea Birdwing male which has more green on the forewings including a thin patch of green in the middle of the black area, and fewer black spots on the hindwing. wingspan: male 125mm; female 150mm

lowland and upland rainforest, found in the wet tropics of eastern coastal Queensland, and around Mackay in Queensland.