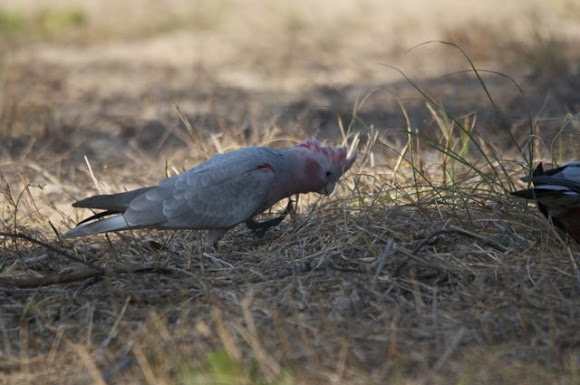 Galahs are about 35 cm (14 in) long and weigh 270–350 g. They have a pale grey to mid-grey back, a pale grey rump, a pink face and chest, and a light pink mobile crest. They have a bone-coloured beak and the bare skin of the eye rings is carunculated. They have grey legs. The genders appear similar, however generally adult birds differ in the colour of the irises; the male has very dark brown (almost black) irises, and the female has mid-brown or red irises. The colours of the juveniles are duller than the adults. Juveniles have greyish chests, crowns, and crests, and they have brown irises and whitish bare eye rings, which are not carunculated.

Galahs are found in all Australian states, and are absent only from the driest areas and the far north of Cape York Peninsula. It is still uncertain whether they are native to Tasmania, though they are locally common today, especially in urban areas.[4] They are common in some metropolitan areas, for example Adelaide, Perth and Melbourne, and common to abundant in open habitats which offer at least some scattered trees for shelter. The changes wrought by European settlement, a disaster for many species, have been highly beneficial for the galah because of the clearing of forests in fertile areas and the provision of stock watering points in arid zones. Flocks of galahs will often congregate and forage on foot for food in open grassy areas.

Such a pretty pink cheeked bird!