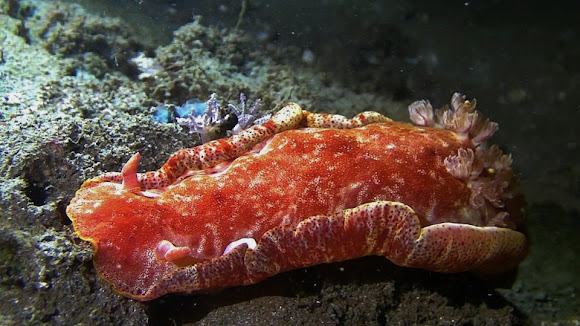 The Spanish dancer, scientific name Hexabranchus sanguineus (literally meaning "blood-colored six-gills"), is a dorid nudibranch, a very large and colorful sea slug, a marine gastropod mollusk in the family Hexabranchidae This species of very large, strong-swimming nudibranch is one of the largest of all nudibranchs: specimens of well over 40 cm in length have been reported.[3] The species name, sanguineus, refers to its bright red coloration, but a yellow variant also exists. This nudibranch has two very different modes of locomotion: crawling and swimming. When it crawls, the wide edges of the mantle (the parapodia) are rolled up close to the body. When the animal swims however, the red parapodia unfurl, and are whirled through the water in a spectacular undulating motion, propelling the animal forwards. The animal was given the common name "Spanish dancer" because the whirling swimming movement, and the red color of the mantle, are reminiscent of the skirt movements of a flamenco dancer. The Emperor shrimp, Periclimenes imperator, is a commensal that is commonly found living on Hexabranchus sanguineus.