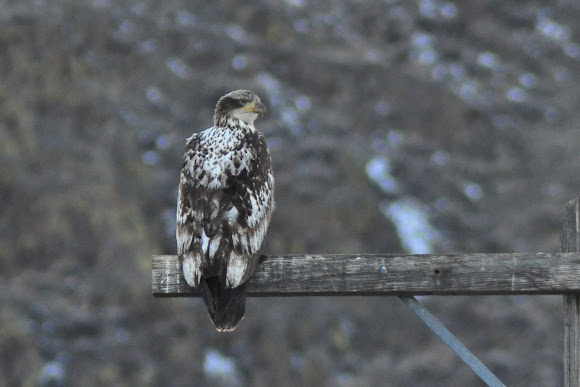 So this is the eagle of hot discussion in Klamath Basin, Oregon. On our way back from our route for the day, I looked up and couldn't believe what I was seeing! The eagle that so many were talking about. At the wildlife visitor center, many birders were debating its origin. The most popular theory being the Bald/Golden Eagle theory. It's a juvenile and there is also discoloration making it even more difficult to ID. Unfortunately, most of my metering is off so it also doesn't help the IDing. Personally, after doing extreme amounts of cross-checking, I think it is a Bald Eagle. But the really interesting part to me is the discoloration. Leucism, to me, doesn't seem like a great possibility because of the amazing, blue eye of this eagle. I cannot find a single shred of information or picture of blue-eyed eagles... anywhere. Maybe somehow it's totally common but this is surprising to me.

Thank you Emily for all the suggestions and help! Your blue eyed theory sounds good but normally doesn't happen like that with birds. I'm still waiting to see if someone knows with certainty or find it out myself hopefully. I also agree with your aging.

That's funny I took a picture of the same exact Leucistic Bald Eagle. And also funny because I think this one is much easier to ID than the other I put up. Now that I think about it, don't know what everyone one so hyped about! Bunch of amateurs ;p

Thanks again Emily and I appreciate everyone's enthusiasm! :)

Ok, so I don't know my bald eagle ages very well, so let me start off by saying that! However, I know there are guidelines to follow regarding identification from hatch year to about 5 years of age. This is definitely a bald eagle in my opinion. And with the exception of the eyes and the anomaly of the tail, I don't see anything too remarkable.

To me this is a 3-4 year old Bald Eagle, leaning more toward age 3. See link: http://www.friendsofthebosque.org/articl...

The eyes may appear blue because they are indeed changing from brown to yellow. I honestly believe that is what is causing the blue color. I have seen this happen with puppies and kittens that have gray eyes. They will turn blue or blue/green and then yellow/amber. It is also possible that this bird got lucky with a recessive gene that causes his eyes to have blue color. Albinism does not cause blue eyes. From what I understand it is the total loss of pigment. The eyes appear pink because you actually are seeing all the blood vessels in the eyes. Here is a luecistic bald eagle for comparison: https://www.facebook.com/media/set/?set=... (I need to contact this lady and tell her to join PN if she hasn't already!)

He/she is a drop dead stunning bird! I am jealous once again Joshua!

Thank you Gabe. There might be something to that, like maybe a genetic mutation not related to the color disorder, but that seems unlikely. And thank you Christy for the suggestions and help :) on the picture from the link, are the eyes also blue? i can't exactly tell.

I'll have to look into that more with other raptors, Gabe...but Bald eagles have dark brown eyes as chicks and it gradually changes to a vivid yellow as an adult. Joshua, if we don't get a response today, I'll post on the Ranger page tonite. But check out the plumage on this guy! http://www.dreamstime.com/royalty-free-s...

Man thats cool. I read that many birds of prey are born with blueish eyes that turn a variety of colors, but eagles usually maintain the same brownish eye color throughout their life.

Don't quote me on that about the eyes! But read the first few paragraphs of this: http://en.wikipedia.org/wiki/Albinism. Look at his schnozz! Definitely doesn't look like the delicate beak of a golden. Have any close-ups of his feet?? I think Balds are more hooked and rougher than a golden for holding onto fish...but not sure if that would be very obvious...

Thank you Christy! for the info and kind words :) I tried looking up albinism and partial albinism with birds of prey but nowhere did I see blue eyes on the albinos. just red and normal colored mostly. I was thinking the same thing though, so we might be onto something! I'll have to keep checking.

Um...yeah...wow! So...the beak looks like a bald...and he's not feathered all the way down to the feet...Can a bald have partial albinism??? Don't albino's have blue eyes??? I don't think balds and goldens can produce offspring...they aren't even in the same genus. He is a beautiful bird!!! Great series, Joshua!