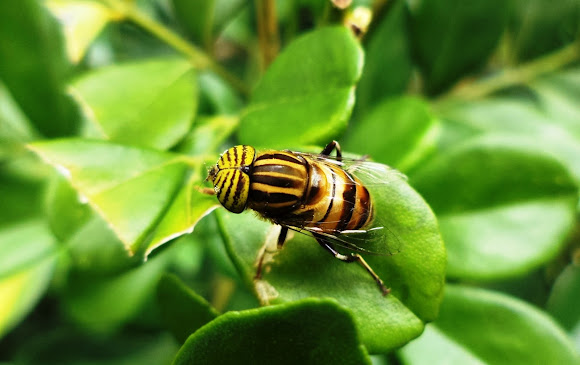 Hoverflies, sometimes called flower flies or syrphid flies, make up the insect family Syrphidae. As their common name suggests, they are often seen hovering or nectaring at flowers; the adults of many species feed mainly on nectar and pollen, while the larvae (maggots) eat a wide range of foods. In some species, the larvae are saprotrophs, eating decaying plant and animal matter in the soil or in ponds and streams. In other species, the larvae are insectivores and prey on aphids, thrips, and other plant-sucking insects. Aphids alone cause tens of millions of dollars of damage to crops worldwide every year; because of this, aphidophagous hoverflies are being recognized as important natural enemies of pests, and potential agents for use in biological control. Some adult syrphid flies are important pollinators. About 6,000 species in 200 genera have been described. Hoverflies are common throughout the world and can be found on all continents except Antarctica. Hoverflies are harmless to most other animals despite their mimicry of more dangerous wasps and bees, which serves to ward off predators. The size of hoverflies varies, depending on the species. Some, like members of the genus Baccha, are small, elongate and slender, while others, like members of Criorhina are large, hairy, and yellow and black. As members of Diptera, all hoverflies have a single functional pair of wings (the hindwings are reduced to balancing organs). They are brightly colored, with spots, stripes, and bands of yellow or brown covering their bodies. Due to this coloring, they are often mistaken for wasps or bees; they exhibit Batesian mimicry. Despite this, hoverflies are harmless. With a few exceptions (e.g.), hoverflies are distinguished from other flies by a spurious vein, located parallel to the fourth longitudinal wing vein. Adults feed mainly on nectar and pollen. They also hover around flowers, lending to their common name.

You're welcome, dotun. I'm glad I could help. Thanks for your compliment.

He sure knows how to mix and match his stripes!

Seen. Yes, variability as you say. Thanks!

I must say that I'm quiet impressed that someone gives a care about such passable details.

Here's another link: http://www.flickr.com/photos/grahamwyatt...
If the ID is correct, I think the thoracic stripes is just variability.

:-) The only thing I was not sure of was the pronounced stripes on the thorax which are usually less pronounced in this species.
http://500px.com/photo/14388089

Very well! Great things happen when we work together ;)