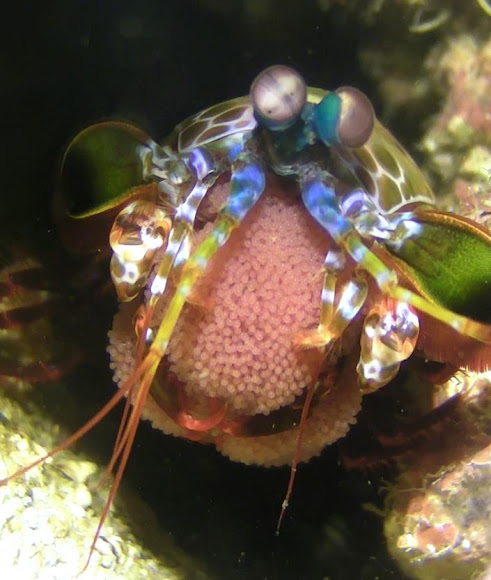 O. scyllarus is one of the larger, more colourful mantis shrimps commonly seen, ranging in size from 3 to 18 centimetres (1.2 to 7.1 in). They are primarily green in colour, with orange legs and leopard-like spots on the anterior carapace. Their ability to see circularly polarised light has led to studies to determine if the mechanisms by which their eyes operate can be replicated for use in reading CDs and similar optical information storage devices. The Females of the Mantis Shrimps carries their Eggs until they are ready to be released when fully developed. During larvae stage of Mantis Shrimps, they tends to be pelagic and are transparent in colors until they settled down in the sea bottom and develop their colors. Mantis shrimp sport powerful claws that they use to attack and kill prey by spearing, stunning, or dismemberment. Although it only happens rarely, some larger species of mantis shrimp are capable of breaking through aquarium glass with a single strike from this weapon

Coral rubble. They usually dig a tunnel in the bottom as their 'house' or hide under rocks and crevices. They are usually seen peeking out from their tunnel homes.

Lovely spotting ! and thanks for the information.