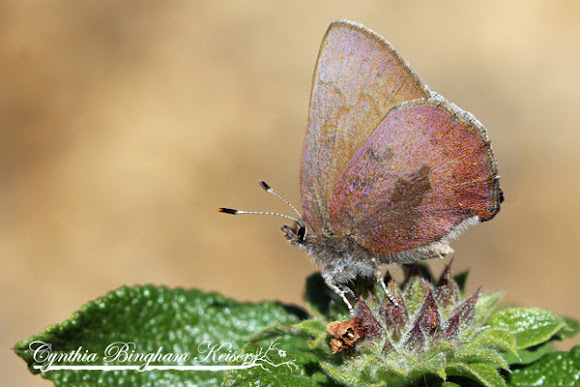 Small, brown butterfly with a wingspan of about 20 mm. There is a dark blotch on the hindwing. This particular butterfly had quite a pink and yellow sheen to it compared to others.

Buckwheat and Sage in chaparral.

"Named after a Canadian Inuit who was called Augustus by the members of the nineteenth-century John Franklin expedition. John Richardson, the naturalist on the Franklin Arctic Expedition. honoured Augustus for his devoted duty to the expedition members (The entomologist William Kirby wrote the actual description) The name chosen, Thecla augustus, had unfortunately already been used to describe another butterfly, so John Obadiah Westwood proposed a slightly modified version, Thecla augustinus, which became the official original name for the species."

Thank you kdpicturemaker and venusflytrap2000. I was hoping she/he would open its wings but no luck.