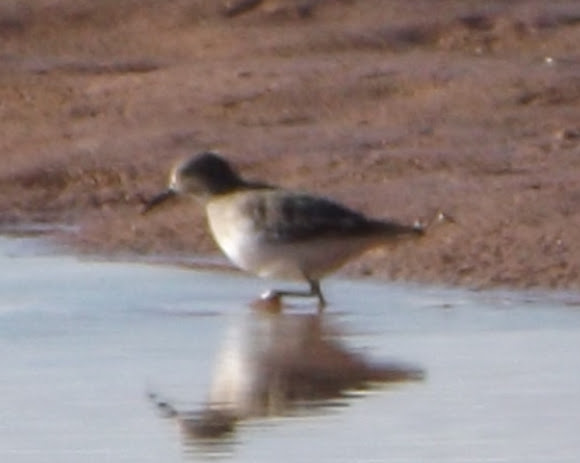 I saw this odd shorebird after the killdeer and least sandpiper had departed. It looked as if it were larger than the Least Sandpiper. I did not realize that I had photographed an unusual species until after I got home from the outing. It searched for food along the muddy shore of the pond. The bill looks intermediate between Western and Least Sandpiper. I would greatly appreciate any suggestions for this mystery bird.

Thanks Des! Semipalmated Sandpipers pass through Arizona during migration in fall.

Least Sandpiper!... Btw, I am pretty sure that semipalmated sandpipers live in Northern Canada and Alaska.

Hi Malcolm! Thank you for your suggestion. Your's makes sense. Semipalmated are typically rare in my county during fall migration, and virtually nonexistent in December. a top birder in the county also commented on this bird via eBird. He thinks it's a Least. My camera is a cheap Fujifilm model, so an upgrade may be in the future! I hadn't heard of RAW file formats before, thank you for sharing that. I will see if I can't set that up on my own camera.

Bill colour is confusing, dark in pic 1 and pale in pic 2, for length I would go for Semipalmated if they are likely to pass through on passage.
Don't know what sort of camera you have but even some hi-ends have difficulty with accurate focussing at high zooms and long distances, some users preferring to use manual focus. A good solid tripod can be a great help but heavy to carry around.
Cameras which only save in jpg lose a lot of quality in the conversion process which cannot be recovered, especially on the small detail of a distant bird. I now use RAW only and get much better quality but need a lot more time to process manually. IS works with camera shake but not with movement.