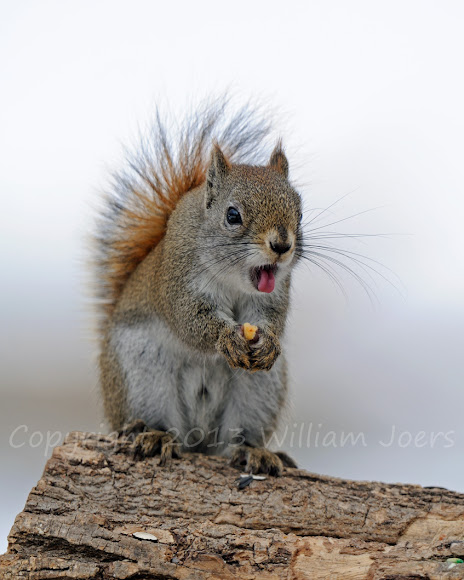 This cute little guy is the smallest of the tree squirrels in my part of the world. It has a reddish coat, with a white underbelly.

This cute little guy lives in an old growth deciduous forest. Normally these cute little guys had been living in pine forests and eating primarily seeds from pine cones. This guy however is dining on other food sources, and is a somewhat frequent visitor to one of my bird feeding stations.

Photographed in my yard, this cute little guy in photo number one looks like he does not like the nut he was eating, because he is sticking out his tongue. In actuality this guy was actually choking, and was trying to cough it up. I had never seen this happen before with a squirrel, and was thrilled to be able to make this capture so I could share it with you.

Thank you so much Luis

Congrats Willie for this great series!

Thanks so much Susan Ellison

Thanks so much Adrián Encontrado.

Thanks Fyn Kynd, and thanks for the friends request on facebook. I post many more of my captures there then on here, as you will soon see. Some will be put up on Project Noah soon, however.

Thanks Carol, you know me, always striving for tack sharp, detail oriented, photos of my sightings.

Thanks for the kind words and comments, randp1, NuwanChathuranga, AntónioGinjaGinja, kiannab1, and Ajwerko. SOTD is quite an honor, and I am touched to have been chosen once again.

Congratulations on SOTD! You have such wonderful photos.

Great capture Wilie,beautiful,congrats on the SOTD and thanks for sharing

SOTD, Wow!, Thank you Project Noah for this great honor.

YukoChartraw, I sure did not see this coming, I was totally blindsided. I will have to put out an assortment of raw nuts for him tomorrow morning, I only hope that he and not the myriad of Eastern Grays that come to my feeders, do not eat them all before he gets a chance. I only have one of these cute guys, and a few dozen Eastern Grays.

I knew that a SOTD was coming! Congratulations! Maybe this cute little guy deserves more nuts from you. ;-)

Congratulations on another wonderful spotting of the day Bill!

A red squirrel chokes on a nut in our spotting of the day.

Thanks so very much Ceherzog