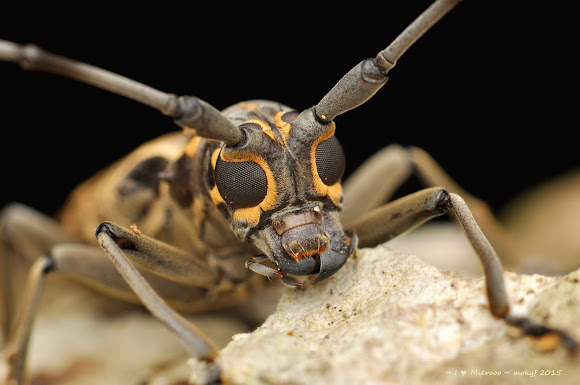 The longhorn beetles (Cerambycidae; also known as long-horned or longhorn beetles or longicorns) are a cosmopolitan family of beetles, typically characterized by extremely long antennae, which are often as long as or longer than the beetle's body. In various members of the family, however, the antennae are quite short (e.g., Neandra brunnea, figured below) and such species can be difficult to distinguish from related beetle families such as the Chrysomelidae. The family is large, with over 26,000 species described, slightly more than half from the Eastern Hemisphere. Several are serious pests. The larvae, called roundheaded borers, bore into wood, where they can cause extensive damage to either living trees or untreated lumber (or, occasionally, to wood in buildings; the old-house borer, Hylotrupes bajulus, being a particular problem indoors). A number of species mimic ants, bees, and wasps, though a majority of species are cryptically colored. The rare titan beetle (Titanus giganteus) from northeastern South America is often considered the largest (though not the heaviest, and not the longest including legs) insect, with a maximum known body length of just over 16.7 cm (6.6 in).[2] The scientific name of this beetle family goes back to a figure from Greek mythology. The shepherd Cerambos was transformed after an argument with nymphs into a large beetle with horns. Source: Wikipedia

MokYounFai I do have an FB account. I will try to find you.

Hi, you have a Facebook acc? You can search for me as I have more bugs and snake photos at my timeline :) Hope you like it :)

Many thanks for everyone for the kind comments :)

Your macro work is brilliant - love it.

It is a Lamiinae, but we cannot ID it without more pictures, specially from the top.