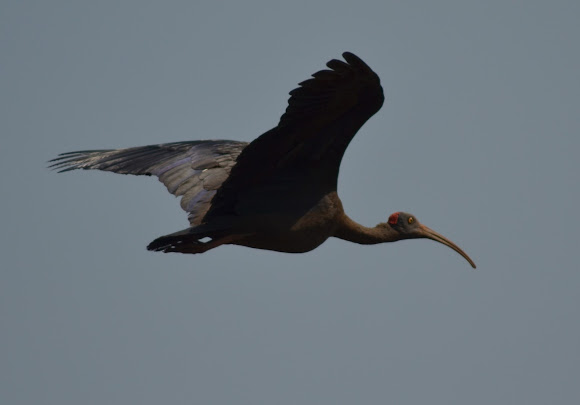 I tried to photograph this beautiful bird on many occasions. but the shy nature of this bird thwarted all my previous attempts. I was lucky this time though.

This largish black bird is found at lakes, in marshes, in riverbeds and on irrigated farmland—it is not as aquatic as many other species of ibis. It is gregarious and generally forages on margins of wetlands in small numbers.

The Red-naped Ibis (Pseudibis papillosa) also known as the Indian Black Ibis or just the Black Ibis, is a species of ibis found in parts of the Indian Subcontinent. The sexes are alike. It has a curlew-like long down-curved bill, a black head with a patch of crimson, and a white patch near the shoulder. It is a common breeding resident in Haryana. It nests in trees and breeds from March to October in North India.