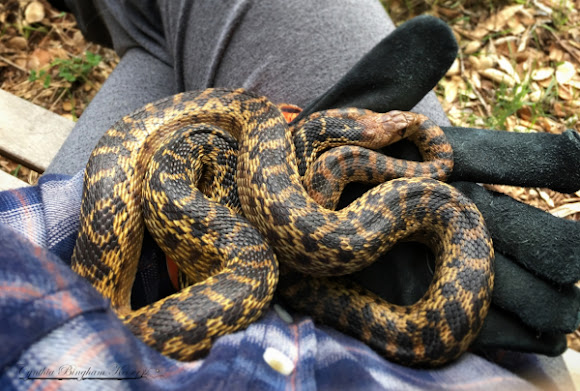 This native Gopher Snake was tan with dark brown splotches on the top and sides. It was about 4 ft long and was spotted early one morning all knotted up in garden/bird netting. This series shown in reverse order documents what could have been a long and torturous death for this beneficial and beautiful snake. The snake was tired and had clearly worked hard to get out of the netting which was compressing its head and body. I cut the netting away slowly and carefully which took almost 10 minutes. I then carefully held the snake to warm it before releasing it. Video links in notes.

Caught in garden/bird netting in a residential yard surrounded by Chaparral. This subspecies is found along the western coast of Southern California, down to northern Baja California. It thrives in grassland, sage scrub, woodland, chaparral, riparian, mountain and coastal habitats.

Thank you Maria and Tukup!!! Spotting reptiles is so fun and never gets old!

You've got some great snake shots Cindy, and good notes too. Thanks for sharing. I'm going to enjoy working through them.

Great educational spotting - thanks for rescuing the snake!

Thank you again!!! I'm so glad I've been able to submit worthy spottings!

Thank you Lauren! I was so happy I could help. We enjoyed seeing this snake periodically through that summer but haven't seen it since.
I'm glad you like the flies! They're so underappreciated :-)

So wonderful Cindy that you saved him! He's probably quite old also, being so large. I love all your pictures! The ones I saw recently of your Leptogastrinae Robber Flies are marvelous!

Thank you Dawn and Mark! I have been busy! My online game has been slow but nature never stops! Glad I can get a little caught up. I missed the PN community.

We appreciate you helping the snake and warming it and then releasing!

Nice job. You have been busy lately. ;-)

Amazing!! Love the story and photos. So happy you were able to save the snake!!

Thank you Antonio, Neil and mauna! It was quite an experience for us and the snake! Glad it had a happy ending :-)

Awesome work! I enjoyed this story and its outcome. 👏🏼

Awesome story, Cindy. I love the videos too. This spotting sould be added to the 2019 Best Photos mission. It doesn't get much more "species interactive" than this :)

Hi Sergio! You know most of us here would do the same thing :-)

Great story, Cindy. You are my hero.

It was very lucky! I was more than happy to save it :-)

How lucky that it could be saved.....thank you .