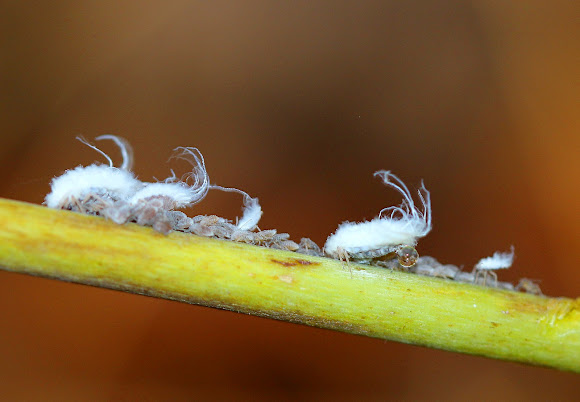 These tiny aphids look like white fuzz balls! They were approximately 1-5mm in length, pear-shaped, and many were covered in waxy, white filaments. The waxy filaments give this intriguing pest a fluffy appearance, as though they were covered in wool, hence their common name. The waxy filaments serve two purposes - they deter predators and reduce friction. Woolly aphids are definite pests. As they feed, they inject saliva into their host plant which helps them digest the sap. This predigested sap is then sucked up by the aphid. They will feed on leaves, buds, twigs, and bark and can cause curled leaves, yellowed foliage, and poor plant growth. In addition, they secrete a sticky waste product called honeydew (see aphid on the right in picture 1). A coating of honeydew can often be found on and beneath infested trees. As a result, sooty mold fungus will sometimes grow on the honeydew. I think these are either Eriosoma sp. or Prociphilus sp. Any help with ID would be appreciated!

I have observed these aphids on this plant 3 times during the past few weeks. Their numbers have decreased since I initially observed them, but I have not seen any with wings. I'm not sure what species this host plant is because the leaves are mostly off it, but it's about 2 feet tall and is located on the side of a nature trail in a swampy, mixed forest. The aphids have always been on the main stem of the plant.

Woolly aphids have a very complex life cycle! Almost all woolly aphids alternate feeding between two host plants and depend on those plants for their life cycle. The primary host plant is the plant that they lay eggs on to overwinter. Female aphids hatch from the eggs during the spring and immediately start producing live offspring without mating. These aphids are simply clones of the original aphids. After 1-2 generations on the primary host, the new aphids develop wings when they reach adulthood. The winged females will then fly to a secondary host plant where they begin feeding and producing additional generations. Most of their growing season is spent on their secondary host. Each female will produce hundreds of clonal offspring even though their average lifespan from birth to adulthood is only about one month. During late summer/early fall, a new generation of winged females is produced on the secondary hosts, which then fly back to the primary host. These winged females produce clones that are both male and female. These aphids then mate with each other. The eggs from this generation will overwinter and start the cycle again in the spring.

Wow! Thanks so much for the nomination! Thanks everyone for the nice comments :)

Great spotting Christine and thanks for the interesting information on their life cycle !

Nicely done, Christine...congratulations on the nomination!

Ha Joshua Asel, perfect! Maybe a little more labor intensive to shear an aphid rather than a sheep though :)

Who needs merino wool when you can have aphid wool?