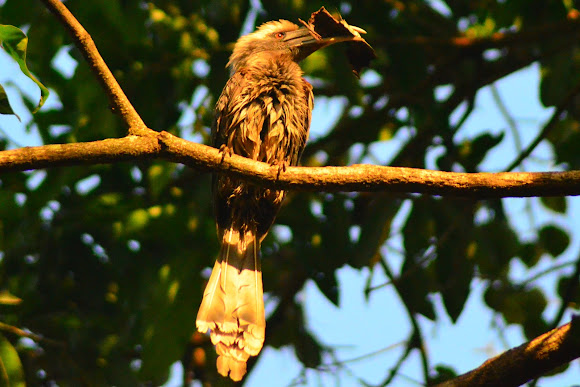 This bird is a regular resident atop the Peepul tree in my campus in Belgaum.

The species is found mainly on the plains up to about 2000 feet. It is found from the foothills of the Himalayas southwards bounded on the west by the Indus system and the Gangetic delta on the east. It may make local movements in the drier western region. It is found even within cities that have old avenue trees.

The Indian Grey Hornbill (Ocyceros birostris) is a common hornbill found on the Indian subcontinent. It is mostly arboreal and is commonly sighted in pairs. They have grey feathers all over the body with a light grey or dull white belly. The horn is black or dark grey with a casque extending up to the point of curvature in the horn. They are one of the few hornbill species found within urban areas in many cities where they are able to make use of large avenue trees.