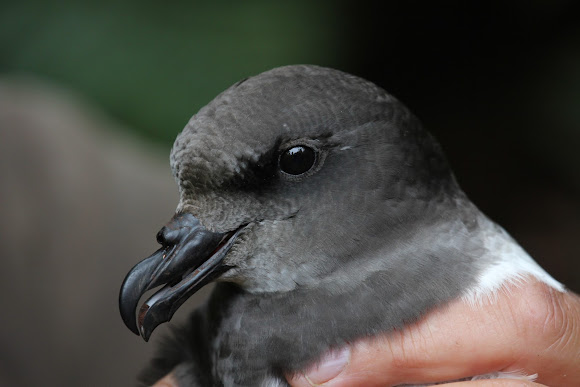 Also known as the Chatham Island Taiko. A medium sized black and white petrel with proportionally long wings and slightly wedge shaped tail with a rounded tip. Head, dorsal surface and both sides of wing are a sooty brown/black. Belly white with a sharp demarcation line between dark neck and white breast. Stout bill and legs and feet pink.

Incredibly rare sea bird with less than 20 breeding pairs recorded. It is an endemic breeder to the Chatham Islands and ranges the southern sub-tropical regions of the Pacific Ocean between east Australia - South America. It is very rarely ever seen at sea.

A lone petrel was shot from the decks of an Italian warship, the "Magenta" in the south Pacific in 1867. At that time it was unknown to science so was named after the ship. It was never recorded again until 1978 when it was rediscovered on the southern end of Chatham Island by New Zealander David Crockett. Its breeding area has been privately protected and managed by The Chatham Island Taiko Trust. Numbers are very fragile. This bird was photographed during routine check on newly returned breeding birds. Ref NZ Birds Online. - For anyone interested in NZ birds this is a great resource.

Thank you armadeus.4. My pleasure to share this incredible experience.

Just wonderful and such an incredibly special bird. Thank you so much for sharing :)

Thank you so much for all that have commented and liked both here and Facebook. And thank you PN for choosing this as your SOTW. Anything that brings the plight of this bird to more people has to be a good thing.

Congratulations triggsturner on this SOTW!

Thank you for sharing this wonderful spotting, information and good news story with us triggsturner. Congratulations on the well-deserved SOTW !. I hope the species flourishes..

Congratulations. Thanks for the NZBO link.

Congrats Triggsturner, this awesome encounter with such a rare species has been chosen as the Rangers-selected Spotting of the Week!

Thank you for the comments and likes. I believe it is a very special bird and its wonderful that PN has nominated it for SOTW.

Thank you Polilla. I did get to hold it but in this case the ranger was doing the holding and I photographed them. You obviously realize how rare this bird is and I appreciate your comment. Thank you again.