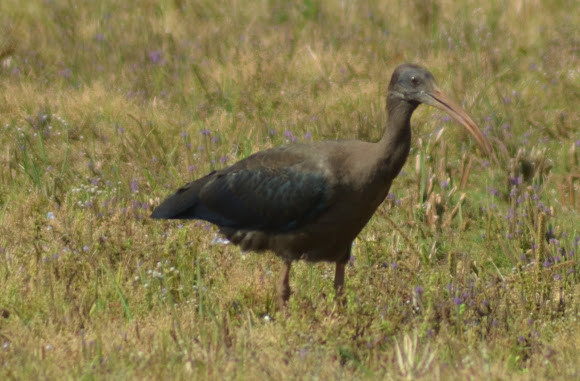 I almost mistook it for Black Ibis. A careful reading of the differences made me realise that this was a new spotting at Rakaskop in Belgaum

Glossy Ibis feed in very shallow water and nest in freshwater or brackish wetlands with tall dense stands of emergent vegetation such as reeds, papyrus or rushes) and low trees or bushes. They show a preference for marshes at the margins of lakes and rivers but can also be found at lagoons, flood-plains, wet meadows, swamps, reservoirs, sewage ponds, paddies and irrigated farmland. It is less commonly found in coastal locations such as estuaries, deltas, salt marshes and coastal lagoons. Preferred roosting sites are normally in large trees which may distant from the feeding areas.

The Glossy Ibis is a wading bird in the ibis family Threskiornithidae.