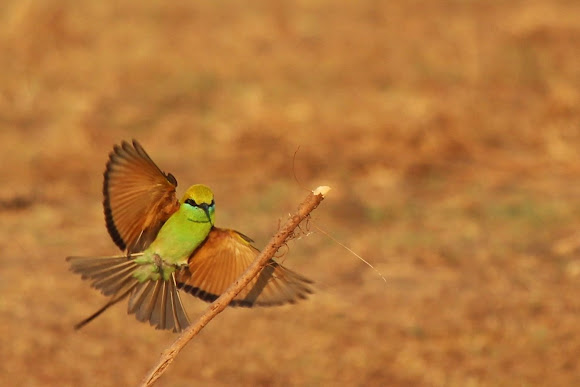 Like other bee-eaters, this species is a richly coloured, slender bird. The sexes are not visually distinguishable. The entire plumage is bright green and tinged with blue especially on the chin and throat. The crown and upper back are tinged with golden rufous. The flight feathers are rufous washed with green and tipped with blackish. A fine black line runs in front of and behind the eye. The iris is crimson and the bill is black while the legs are dark grey. The feet are weak with the three toes joined at the base.

Seen near a beach.

A study suggested that Green Bee-eaters may be capable of interpreting the behaviour of human observers. They showed an ability to predict whether a human at a particular location would be capable of spotting the nest entrance and then behaved appropriately to avoid giving away the nest location. The ability to look at a situation from another's point of view was previously believed to be possessed only by primates.

You framed the gesture very well :)