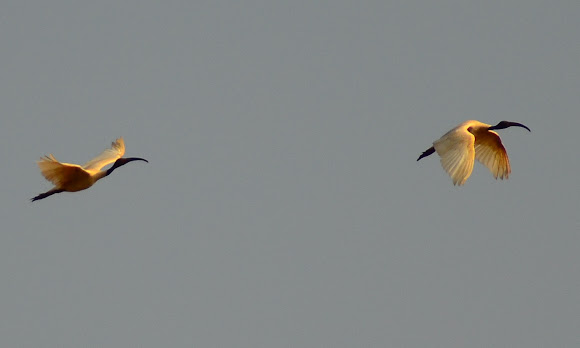 As always, the water bodies ;ike Argan Talab and Rakaskop will never fail you when you want see see birds like this in their natural habitat.

It occurs in marshy wetlands inland and on the coast, where it feeds on various fish, frogs and other water creatures, as well as on insects. It walks about actively on marshy land probing with its bill into soft mud and often feeds in shallow water with its head momentarily submerged. Like storks and Spoonbills, it lacks a true voice-producing mechanism and is silent except for peculiar ventriloquial grunts uttered when nesting.

The Black-headed Ibis or Oriental White Ibis is a species of wading bird of the ibis family Threskiornithidae which breeds in the Indian Subcontinent and Southeast Asia from northern India, Bangladesh, Nepal and Sri Lanka east up to Japan.