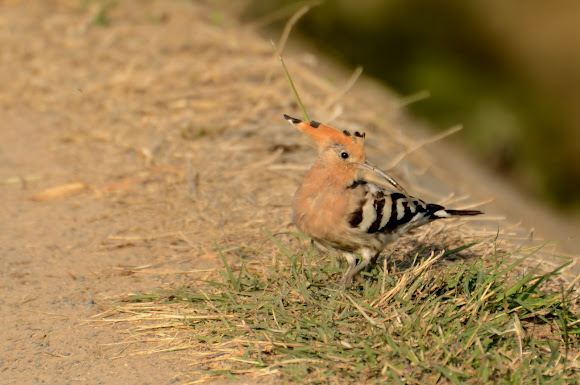 The Hoopoe is a colourful bird that is found across Afro-Eurasia, notable for its distinctive 'crown' of feathers. It is the only extant species in the family Upupidae. It is a medium sized bird, 25–32 cm (9.8–12.6 in) long, with a 44–48 cm (17.3–19 in) wingspan weighing 46–89 g (1.6–3.1 oz). The species is highly distinctive, with a long, thin tapering bill that is black with a fawn base. The strengthened musculature of the head allows the bill to be opened when probing inside the soil. The hoopoe has broad and rounded wings capable of strong flight; these are larger in the northern migratory subspecies. The Hoopoe has a characteristic undulating flight, which is like that of a giant butterfly, caused by the wings half closing at the end of each beat or short sequence of beats.