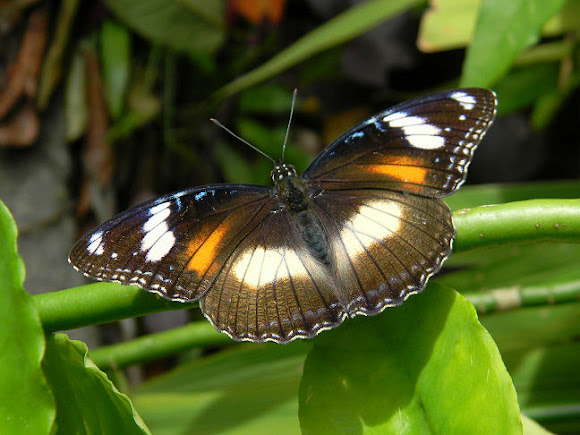 This exquisite butterly (a female) is known variously as the great, common or varied eggfly, It is found from Madagascar through to south and southeast Asia, south Pacific islands and occurs in parts of Australia, New Guinea, New Zealand and Japan. It is the most common Hypolimnas in Papua. To the west of this greater range the female is monomorphic, mimicking species of the oriental and Australasian danaid genus Euploea. Eastwards H. bolina is frequently polymorphic and most forms are then non-mimetic. In areas where it resembles Euploea the butterfly has usually been designated a Batesian mimic. H. bolina is known for maternal care, with the females guarding leaves where eggs have been laid. The species derives its common name from the egg-shaped patches on males' wings.The common eggfly butterfly male is very territorial. It will aggressively chase away any male that flies into its territory. It then returns back to the same spot where it may stay in this and other spots for many days.

Spotted in close proximity to fallen ripe guavas and shown here perching on Devil's backbone (Euphorbia tithymaloides) and on the ground. This spotting is a large semi-urban yard and garden near a disturbed patch of remnant equatorial lowland forest.

Thanks António and J!