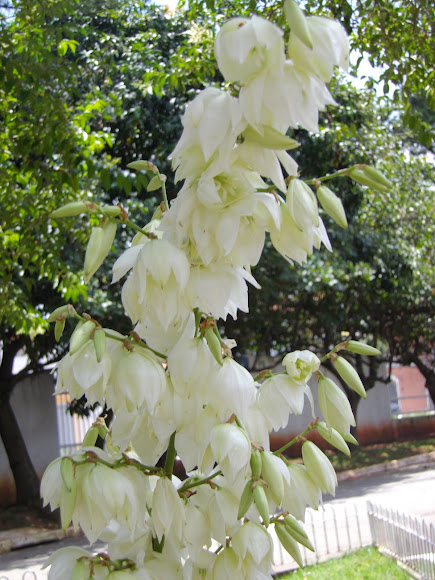 Reino: Plantae Clado: Angiospermas Clado: Monocots Ordem: Asparagales Família: Asparagaceae Subfamília: Agavoideae Gênero: Yucca Yucca is a genus of perennial shrubs and trees in the family Asparagaceae, subfamily Agavoideae. Its 40-50 species are notable for their rosettes of evergreen, tough, sword-shaped leaves and large terminal panicles of white or whitish flowers. They are native to the hot and dry (arid) parts of the Americas and the Caribbean. Early reports of the species were confused with the cassava (Manihot esculenta).Consequently, Linnaeus mistakenly derived the generic name from the Taíno word for the latter, yuca (spelled with a single "c"). It is commonly found growing in rural graveyards and when in bloom the cluster of (usually pale) flowers on a thin stalk appear as floating apparitions.

The natural distribution range of the genus Yucca (49 species and 24 subspecies) covers a vast area of North America, Central America, and South America. From Baja California in the west, northwards into the southwestern United States, through the drier central states as far north as Alberta in Canada (Yucca glauca ssp. albertana). Yucca is also native to the lowlands and dry beach scrub of the Gulf and South Atlantic states from coastal Texas to easternmost Virginia. To the south, the genus is represented throughout Mexico and extends into Guatemala (Yucca guatemalensis). Yuccas have adapted to an equally vast range of climatic and ecological conditions. They are to be found in rocky deserts and badlands, in prairies and grassland, in mountainous regions, in light woodland, in coastal sands (Yucca filamentosa), and even in subtropical and semitemperate zones, although these are generally arid to Semi-arid climate-semiarid.