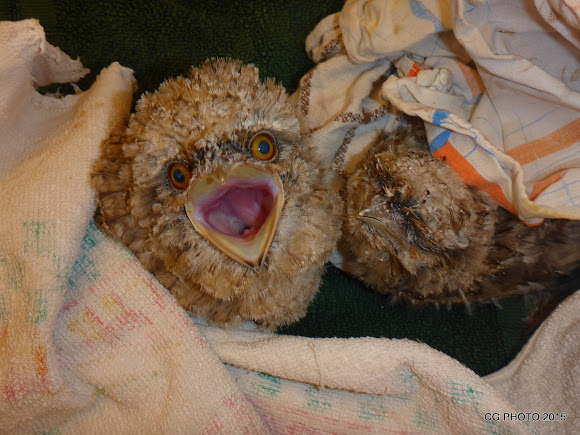 These babies have been rescued by me after both parents have been killed. They are with a wildlife carer in the moment and will be released back on my place when they are ready.

The general plumage of the Tawny Frogmouth is silver-grey, slightly paler below, streaked and mottled with black and rufous. A second plumage phase also occurs, with birds being russet-red. The eye is yellow in both forms, and the wide, heavy bill is olive-grey to blackish. South-eastern birds are larger than birds from the north. Tawny Frogmouths are nocturnal birds (night birds). During the day, they perch on tree branches, often low down, camouflaged as part of the tree.

Awesome series,a story with a happy end,my prefered :) congrats on the well deserved SOTD and thanks for sharing

Thanks guys.. Marta RubioTexeira, I could see the nest from my veranda and that morning I saw that it was empty.. So I had a closer look.. These guys are so well camouflage and they do not move at all till you nearly stand on them.. I found the smaller one first, covered in ants.. It was bleeding for its foot. I freed it and it in a box before looking for the others. I found the parent half eaten by something. ( Goanna, Powerful Owl or Eagle were all seen) After nearly 1 1/2 hours searching around the tree, with my dog we found the 2. sitting really still next to a rock... we must have passed it 20 times.. the 3. one must have been taken, we never found it!

Great stuff Christiane, lets hope the little guys make it. Thank you for sharing the story and well done on your SOTD.

Congratulations!!! Love these birds so it's nice to hear stories like yours :)

Congrats Christiane and thanks for the update! We had to feature this: inspiring and educational at the same time :-)

Beautiful story although sad that the parents died. Amazing that you could find them. Did you have to climb up a tree to get them? Looking forward to the updates :-)

Thanks Ashley and I will keep this post updated. Just learning the slow release program for them and It looks like a long time for them to be free.. :)

Congrats Christiane, this awesome rescue series has been chosen as Spotting of the Day! Though it is sad the parents died, it is so great that you were able to get most of the babies to someone that can care for them, and even better that they will be released back into your yard! Keep us updated on the story!

Update on the Babies.. Both are doing find and eating well.. Just got 2 photos send by the carer.. It took me over an hour to find them. So happy I did. :)

Little darlings. I hope they both do well and you see them again soon. Great job saving them. Nature can sometimes be heartbreaking hey.

One was killed by a car and the other one I found dead under the tree. We think a eagle or a goanna..

How were the parents killed?

thanks for the rescue!