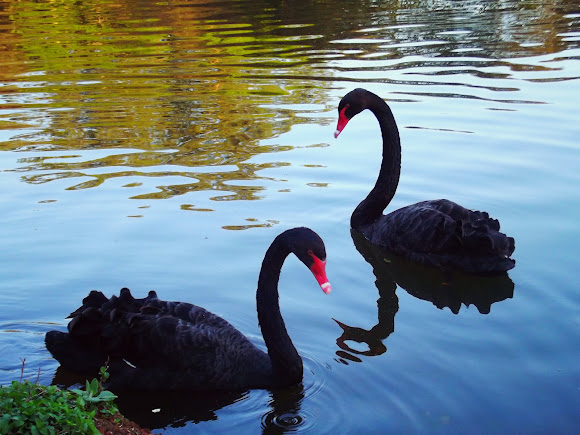 Black Swans are mostly black-feathered birds, with white flight feathers. The bill is bright red, with a pale bar and tip; and legs and feet are greyish-black. Cobs (males) are slightly larger than pens (females), with a longer and straighter bill. Cygnets (immature birds) are a greyish-brown with pale-edged feathers. A mature Black Swan measures between 110 and 142 centimetres (43 and 56 in) in length and weighs 3.7–9 kilograms (8.2–19.8 lb). Its wing span is between 1.6 and 2 metres (5.2 and 6.6 ft). The neck is long (relatively the longest neck among the swans) and curved in an "S"-shape. The Black Swan utters a musical and far reaching bugle-like sound, called either on the water or in flight, as well as a range of softer crooning notes. It can also whistle, especially when disturbed while breeding and nesting. When swimming, Black Swans hold their necks arched or erect, and often carry their feathers or wings raised in an aggressive display. In flight, a wedge of Black Swans will form as a line or a V, with the individual birds flying strongly with undulating long necks, making whistling sounds with their wings and baying, bugling or trumpeting calls. The Black Swan is unlike any other Australian bird, although in poor light and at long range it may be confused with a Magpie Goose in flight. However, the Black Swan can be distinguished by its much longer neck and slower wing beat. One captive population of black swans in Lakeland, Florida has produced a few individuals that a light mottled grey color instead of black. http://en.wikipedia.org/wiki/Black_Swan

The Black Swan is common in the wetlands of south western and eastern Australia and adjacent coastal islands. In the south west the range ecompasses an area between North West Cape, Cape Leeuwin and Eucla; while in the east it covers are large region bounded by the Atherton Tableland, the Eyre Peninsula and Tasmania, with the Murray Darling Basin supporting very large populations of Black Swans. It is uncommon in central and northern Australia. The Black Swan's preferred habitat extends across fresh, brackish and salt water lakes, swamps and rivers with underwater and emergent vegetation for food and nesting materials. Permanent wetlands are preferred, including ornamental lakes, but Black Swans can also be found in flooded pastures and tidal mudflats, and occasionally on the open sea near islands or the shore. Black Swans were once thought to be sedentary, but the species is now known to be highly nomadic. There is no set migratory pattern, but rather opportunistic responses to either rainfall or drought. In high rainfall years, emigration occurs from the south west and south east into the interior, with a reverse migration to these heartlands in drier years. When rain does fall in the arid central regions, Black Swans will migrate to these areas to nest and raise their young. However, should dry conditions return before the young have been raised, the adult birds will abandon the nests and their eggs or cygnets and return to wetter areas. Black Swans, like many other water fowl, lose all their flight feathers at once when they moult after breeding, and they are unable to fly for about a month (This time may vary). During this time they will usually settle on large, open waters for safety. The species has a large range, with figures between one to ten million km² given as the extent of occurrence. The current global population is estimated to be up to 500,000 individuals. No threat of extinction, or significant decline in population has been identified with this numerous and widespread bird. Black Swans were first seen by Europeans in 1697, when Willem de Vlamingh's expedition explored the Swan River, Western Australia http://en.wikipedia.org/wiki/Black_Swan

is a large waterbird, a species of swan, which breeds mainly in the southeast and southwest regions of Australia. The species was hunted to extinction in New Zealand, but later reintroduced. Within Australia they are nomadic, with erratic migration patterns dependent upon climatic conditions. Black Swans are large birds with mostly black plumage and red bills. They are monogamous breeders that share incubation duties and cygnet rearing between the sexes. Described scientifically by English naturalist John Latham in 1790, the Black Swan was formerly placed into a monotypic genus, Chenopis. Black Swans can be found singly, or in loose companies numbering into the hundreds or even thousands. Black Swans are popular birds in zoological gardens and bird collections, and escapees are sometimes seen outside their natural range. http://en.wikipedia.org/wiki/Black_Swan