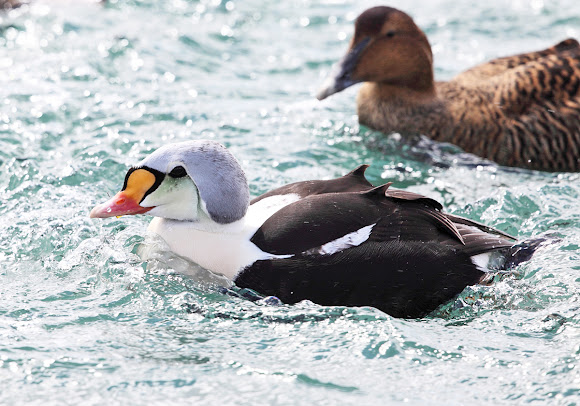 The King Eider (Somateria spectabilis) is a large sea duck that breeds along Northern Hemisphere Arctic coasts of northeast Europe, North America and Asia. The birds spend most of the year in coastal marine ecosystems at high latitudes, and migrate to Arctic tundra to breed in June and July. They lay four to seven eggs in a scrape on the ground lined with grass and down. The King Eider winters in arctic and subarctic marine areas, most notably in the Bering Sea, the west coast of Greenland, eastern Canada and northern Norway. It also occurs annually off the northeastern United States, Scotland and Kamchatka. Breeding areas include the Arctic coastal tundra of the north coast of Alaska. This species dives for benthic invertebrates, such as crustaceans, polychaete worms, and molluscs, with mussels being a favoured food. Wintering birds can form large flocks on suitable coastal waters, with some flocks exceeding 100,000 birds. Female at Alaska Sea Life Center, Seward, Alaska This species is smaller than the Common Eider. The male is unmistakable with its black body, white breast and multicoloured head. The drake's call is a deep cooing. The female (occasionally colloquially referred to as a "Queen Eider"[2]) is a brown bird, but can still be readily distinguished from all ducks except other eider species on size and structure. The head is shorter than in the Common Eider, and the feathering extension onto the bill is rounded, not triangular in shape. An immature drake is typically all dark with a white breast and a yellow bill patch. Eclipse adult drakes are similar but lack the white breast. The King Eider is one of the species to which the Agreement on the Conservation of African-Eurasian Migratory Waterbirds (AEWA) applies. [Wikipedia]

This King Eider has been in the Cape Cod Canal for about a week. Today's spotting was the closest I've ever seen a King Eider, less than 50 feet away.

Oh sorry Tom, I thought it was a strange question coming from you :)

Debbie, I pronounce it the same as you. Actually I copied and pasted the Wikipedia page and that's where the pronunciation question came from. I'll remove it from the text.

you asked about pronunciation of Eider Tom and I've always pronounced it eye-der :)

Thanks Rod and Harsha!