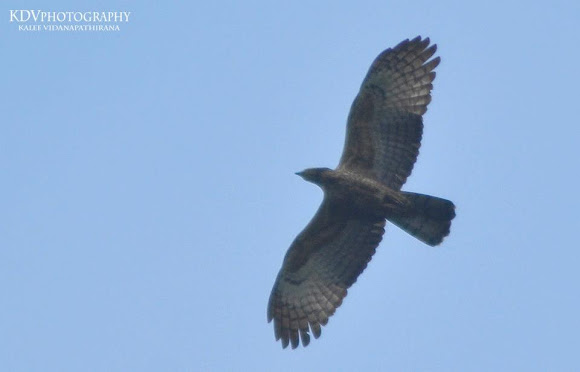 The Crested Honey Buzzard, Pernis ptilorhynchus, is a bird of prey in the family Accipitridae which also includes many other diurnal raptors such as kites, eagles and harriers. This species is also known as the Oriental Honey Buzzard. Female at Bharatpur In Kolkata Despite its name, this species is not related to Buteo buzzards, and is taxonomically closer to the kites.[citation needed] It appears long-necked with a small head (resembling that of a pigeon), and soars on flat wings. The head lacks a strong supraciliary ridge giving it a very un-raptor-like facial appearance. It has a long tail and a short head crest. It is brown above, but not as dark as Honey Buzzard, and paler below. There is a dark throat stripe. Unusually for a large bird of prey, the sexes can be distinguished. The male has a blue-grey head, while the female's head is brown. She is slightly larger and darker than the male. The male has a black tail with a white band, whilst the female resembles female Honey Buzzard. It breeds in Asia from central Siberia east to Japan. It is a summer migrant to Siberia, wintering in tropical south east Asia. Elsewhere it is more-or-less resident. It is a specialist feeder, living mainly on the larvae and nests of wasps, although it will take other small insect prey such as cicadas.[2] The Crested Honey Buzzard breeds in woodland, and is inconspicuous except in the spring, when the mating display includes wing-clapping. The display of roller-coasting in flight and fluttering wings at the peak of the ascent are characteristic of the genus Pernis.[3][4] It is larger and longer winged than its western counterpart, the European Honey Buzzard, Pernis apivorus.