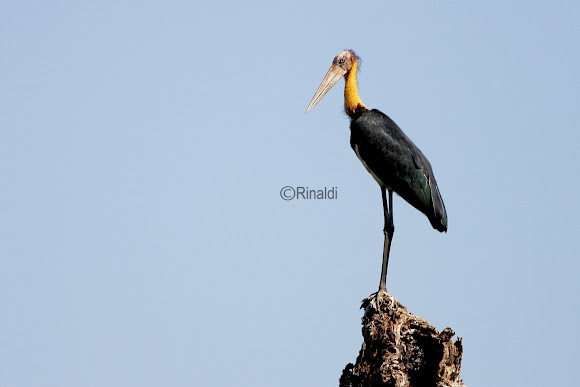 A large stork with an upright stance, a bare head and neck without a pendant pounch, it has a length of 87–93 cm (34–37 in) (outstretched from bill-to-tail measurement), weigh from 4 to 5.71 kg (8.8 to 12.6 lb) and stands about 110–120 cm (43–47 in) tall.[2][3][4] The only confusable species is the Greater Adjutant, but this species is generally smaller and has a straight upper bill edge (culmen), measuring 25.8–30.8 cm (10.2–12.1 in) in length, with a paler base and appears slightly trimmer and less hunch-backed. The skullcap is paler and the upper plumage is uniformly dark, appearing almost all black. The nearly naked head and neck have a few scattered hair-like feathers. The upper shank or tibia is grey rather than pink, the tarsus measures 22.5–26.8 cm (8.9–10.6 in). The belly and undertail are white. Juveniles are a duller version of the adult but have more feathers on the nape.[5] During the breeding season, the face is reddish and the neck is orange. The larger median wing coverts are tipped with copper spots and the inner secondary coverts and tertials have narrow white edging. The wing chord measures 57.5–66 cm (22.6–26 in) in length. Like others in the genus, they retract their necks in flight. In flight, the folded neck can appear like the pouch of the Greater Adjutant.[6] Males and females appear similar in plumage but males tend to be larger and heavier billed.

The Lesser Adjutant tends to be widely dispersed and is very local. It is often found in large rivers and lakes inside well wooded regions. It is found in India, Nepal,[8] Sri Lanka, Bangladesh, Myanmar, Thailand, Vietnam, Malaysia, Laos, Singapore,[9] Indonesia and Cambodia. The largest population is in India in the eastern states of Assam, West Bengal and Bihar. It may occur as a vagrant on the southern edge of Bhutan.[10] They are extremely rare in southern India