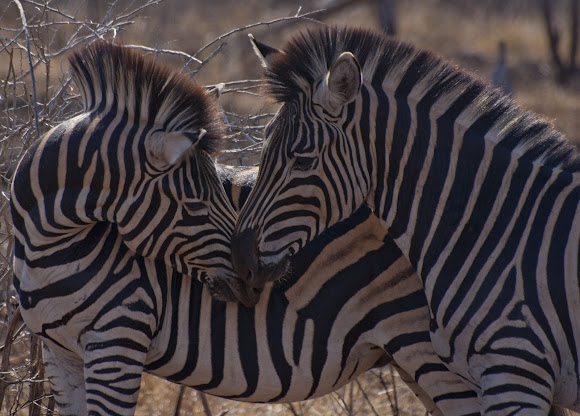 Zebras have horse like bodies, but their manes are made of short, erect hair, their tails are tufted at the tip and their coats are striped. The plains zebra is the most common Zebra, and has or had about twelve subspecies distributed across much of southern and eastern Africa. Zebras feed almost entirely on grasses, but may occasionally eat shrubs, herbs, twigs, leaves and bark. Their digestive systems allow them to subsist on diets of lower nutritional quality than that necessary for other herbivores.

Plains Zebras inhabit savannas, from treeless grasslands to open woodlands. They sometimes occur in tens of thousands in migratory herds on the Serengeti plains.

No two Zebra have the same striping, as in fingerprints in humans the stripes of Zebra are unique to an individual. The Burchell’s Zebra is the national animal of Botswana and is found on the coat of arms of the country.