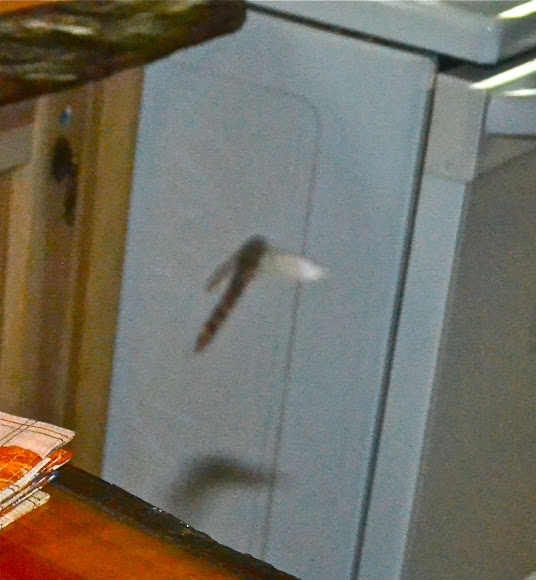 I was not able to get an ID on the spider I took the pictures of, but the bug was what I really wanted an ID on. It was annoying, noise, and it was the estrange way it flew, strait not horizontal that caught my attention, I also was wondering how it could fly with such high (close to head) small wings? Atractocerus species are rarely encountered and therefore, not well studied. Their evolutionary history is still unknown; however, the oldest known lymexylid fossil is a very primitive member of the genus Atractocerus preserved in 100 myo Burmese amber (Grimwold & Engel 2005). Thus, the lineage containing these beetles had already appeared by the mid-Cretaceous and may have originated as early as the Jurassic, a fact that has earned them the moniker ‘living fossils.’ These beetles were once thought to be among the most primitive of all Coleoptera – their simple wing venation, almost undifferentiated antennae and tarsi, and naked abdomen being likened to a supposed neuropteran common ancestor.”

This spotting was changed from needing an ID on the spider to the bug the spider caught because I found the name of the bug. I was chasing a very hyper, 2 inch, long tail bug with small size wings for a few pictures...when this spider stole it !! fangs on the head it would not let go of it!! the insect straggle and started to lose...her eggs!!?? I let nature continue it's course, when I look next no spider, no bug and no eggs!!??

I have changed this spotting to the Bug/Beetle instead of the spider. One of the most annoying but interesting Beetle I have ever seen.
I found the ID on "What's that Bug"
http://www.whatsthatbug.com/2011/05/13/w...

ID on this spider will be appreciated.