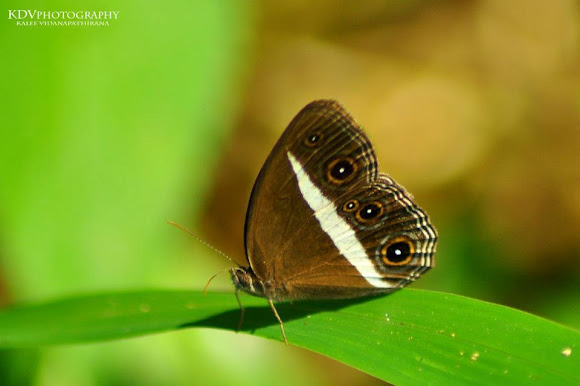 Orsotriaena medus is a medium-sized butterfly with wingspan of 45 to 55 mm (1.8 to 2.2 in). The butterfly is dark brown above with a thin marginal pale border. The upper hindwing having a thin submarginal line. There are no eye-spots on the upper side of the wings.[3] Below, the butterfly has a white discal band which runs across both wings. It has five ocelli beloe (eyespots) on the undersides of the wings. In the forewing, it has two eyespots, with the anterior eyespot slightly smaller. In the hindwing, it has two ocelli on the apical region and a separate ocellus in the tornal (hindmost) region. The uppermost of the eyespots in the hindwing are greatly smaller, while the remaining two are more or less of equal sizes.[3] The eggs are spherical and yellowish. They are laid on the leaf blades and stems of grasses.[3] The larvae are spindle-shaped, transversely wrinkled, and covered in small tubercles, giving it a rough appearance. Two long brown spines on the head point forward, while a pair of pinkish prongs project from the anal segment. The colour above is rosy-red with a blue dorsal and a white lateral line, below which, the underparts are green.[4] The pupae are perpendicularly suspended, slender and regular, except that the head-case is produced into a long beak formed of two thin processes like split straws. The colour is whitish brown to yellow, with faint bands of a darker shades. It resembles a large grain of barley or a tiny banana.[4][5] Orsotriaena medus superficially resemble members of the genus Mycalesis (bushbrowns), but can readily be identified by the number of spots.