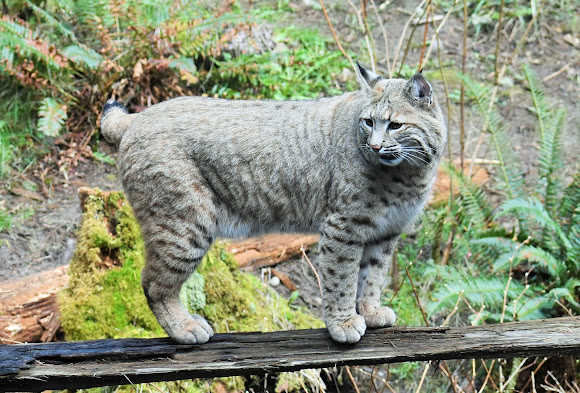 With a gray to brown coat, whiskered face, and black-tufted ears, the bobcat resembles the other species of the midsized Lynx genus. It is smaller on average than the Canada lynx, with which it shares parts of its range, but is about twice as large as the domestic cat. It has distinctive black bars on its forelegs and a black-tipped, stubby (or "bobbed") tail, from which it derives its name.

Spotted at the Northwest Trek Wildlife Park. The bobcat is an adaptable predator that inhabits wooded areas, as well as semidesert, urban edge, forest edge, and swampland environments. It remains in some of its original range, but populations are vulnerable to local extinction ("extirpation") by coyotes and domestic animals. The range is most of the United States, Southern Canada and the northern two thirds of Mexico.

Bobcats often prey on rabbits, hares, and rodents. The bobcat is able to survive for long periods without food, but eats heavily when prey is abundant. During lean periods, it often preys on larger animals, which it can kill and return to feed later. The bobcat hunts by stalking its prey and then ambushing with a short chase or pounce. Its preference is for mammals weighing about 1.5 to 12.5 lb (0.68 to 5.67 kg). Its main prey varies by region. In the eastern United States, it is the eastern cottontail species, and in the north it is the snowshoe hare. When these prey species exist together, as in New England, they are the primary food sources of the bobcat. In the far south, the rabbits and hares are sometimes replaced by cotton rats as the primary food source. Birds up to the size of a swan are also taken, along with their fledglings and eggs. The bobcat is an opportunistic predator that, unlike the more specialized Canada lynx, readily varies its prey selection.

Thank you for your comments maplemoth.

Thank you Zlatan for bringing that to my attention and for commenting.

Just curious: why do you have Canada Lynx as reference??

Beautiful spotting and great notes; as always. Thanks Brian.