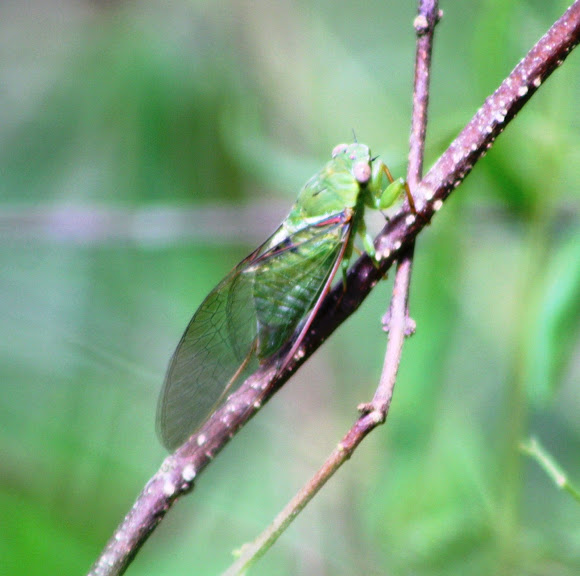 The adult insect, known as an imago, is usually 2 to 5 centimetres (0.79–2.0 in) long, although some tropical species can reach 15 centimetres (5.9 in), e.g. Pomponia imperatoria from Malaysia. Cicadas have prominent eyes set wide apart on the sides of the head, short antennae protruding between or in front of the eyes, and membranous front wings. Also, commonly overlooked, cicadas have three small eyes, or ocelli, located on the top of the head between the two large eyes that match the colour of the large eyes.

Around 220 cicada species have been identified in Australia, many of which go by common names such as: cherry nose, brown baker, red eye (Psaltoda moerens), green grocer/green Monday, yellow Monday, whisky drinker, double drummer (Thopha saccata), and black prince. The Australian green grocer, Cyclochila australasiae, is among the loudest insects in the world.Being principally tropical insects, most Australian species are found in the northern states. However, cicadas occur in almost every part of Australia: the hot wet tropical north; Tasmanian snowfields; Victorian beaches and sand dunes such as Torquay and deserts. Some species, such as the Green Grocer, are not restricted to coastal or desert zones in Victoria.