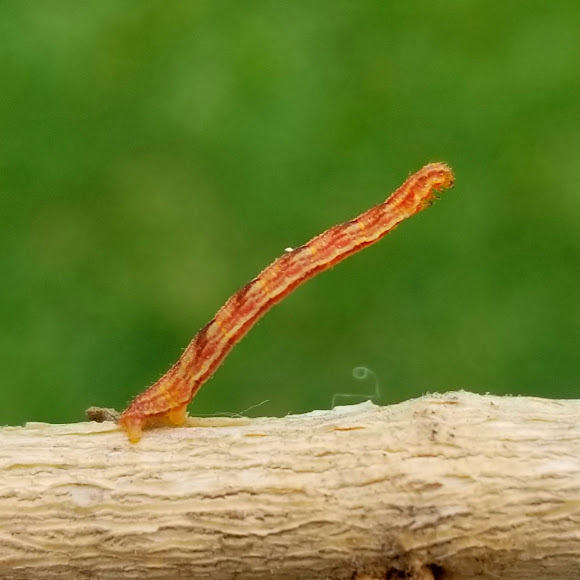 This is an omnivorous caterpillar of a geometrid moth. This caterpillar was resting on a flower, which is a normal behavior to catch it's prey, (mainly flies). I don't think it had any luck there, so it later made it's way to a dead stick, of an (jasminum sambac) where, it was resting in it's stick posture in picture one. It walked around the plant, and probably felt the flower was a better place to get a meal, so it went back. One thing that was surprising, was that the caterpillar is mainly carnivorous, having that said, gets less energy, from another animal, then the main energy source the leaves. So why wouldn't it go for eating more of it's host plant that other insects ? I have no idea, other then it's making use of its stick mimicry. My hundredth spotting :)

In my garden, Fort Worth, Texas.

While it was on the stick, I noticed, some feces stuck on its back pair of prolegs, and in the feces was a small piece of what I think was a flies wing. Here is the moth of this caterpillar I saw this month. https://www.projectnoah.org/spottings/58...